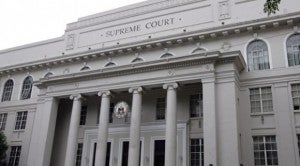 MANILA, Philippines—The Supreme Court issued a one-line acknowledgment, while others are cautious that Malacañang’s chief defender now sits as the 15th associate justice in the Supreme Court.

President Aquino chose Jardeleza out of five nominees late afternoon Tuesday, shortly after the high court, with a vote of 7-4, ordered his inclusion in the Judicial and Bar Council’s (JBC) shortlist of nominees despite the standing opposition of Chief Justice Maria Lourdes Sereno herself because of an integrity issue.

“The Court acknowledges receipt as of 9:31AM today of the appointment papers dated Aug. 19 of its 173d Associate Justice Francis H. Jardeleza,” the Supreme Court said on its Twitter account (@SCPh_PIO).

With Jardeleza’s appointment, Aquino’s chosen magistrates now number to five, including Sereno and Associate Justice Marvic Leonen in 2012 and Estela Perlas-Bernabe and Bienvenido Reyes in 2011.

Alliances are known to persist among magistrates, including the known history of conflict between the most senior magistrate, Associate Justice Antonio Carpio, and Sereno. The two, however, jointly blocked Jardeleza’s inclusion in the shortlist, citing doubts on his integrity due to the way he handled the Philippines’ arbitration case against China before the United Nations.

Still, propelled by a direct endorsement from Malacañang for his inclusion in the JBC shortlist, Jardeleza became the last-minute addition to President Aquino’s choices for the new magistrate, winning the vote of seven justices in the high court on Tuesday.

For petitioners fighting Malacañang’s appeal to the high court’s decision that struck down the Disbursement Acceleration Program (DAP) as unconstitutional, Jardeleza’s Palace-backed ascent to the high court is something to be wary about.

It was Jardeleza who, as chief government counsel, filed the executive branch’s appeal to the DAP ruling, citing how it was undertaken in good fath and was covered by existing budget regulations. The Palace also argued in the appeal that the DAP was already “operationally dead” at the time it was petitioned in court, with the use of funds diminishing over the last three years.

The high court, in a unanimous ruling on July 1, had found the program unconstitutional for usurping Congress’ exclusive power of the purse and for violating government budget regulations.

“In appointing Jardeleza, Aquino used the Supreme Cout to out-muscle the JBC (with a vote of 7-4), exposing a rift within the high court which the President will find useful during the deliberations on the DAP motions for reconsideration,” said Renato Reyes Jr., Secretary-General of Bagong Alyansang Makabayan.

Bayan is among nine petitioners now opposing Malacañang’s appeal to the DAP ruling.

“Justice Jardeleza now owes Aquino big time. It was Aquino who exerted extra effort to delay appointing a new Supreme Court Justice until Jardeleza was included in the JBC shortlist. It was Aquino who went against the JBC in an obvious power play versus the SC. So Jardeleza’s independence would naturally be questionable,” said Reyes in a statement.

He saw Jardeleza as a pawn in the continuing one-upmanship between the Palace and the high court, with him at the lead of defending DAP and the Enhanced Defense Cooperation Agreement (EDCA), a defense pact between the Philippines and the United States also petitioned before the high court.

“These two petitions remain pending before the Supreme Court. It seems the Jardeleza appointment is still in line with Aquino’s war with the Supreme Court in the aftermath of the DAP ruling. We fear for the implications of his appointment in the pending DAP petition now that there is a pending government appeal,” said Reyes.

Greco Belgica, another DAP petitioner, believed Jardeleza was an appropriate choice given his involvement in Palace cases.

“I think the Solicitor-General is a very likable person. But pending an appeal on DAP which he made in his capacity as Solicitor-General, it would not be right to have him appointed as Associate Justice as well. There is personal interest and a conflict of interest to appoint him right now as associate justice pending an appeal he both wrote and defended,” Belgica said in a statement.

Belgica’s lawyer in the DAP petition, Harry Roque, meanwhile, believed in the delicadeza of Jardeleza.

“I am very happy with the choice. I don’t believe he will meddle out of delicadeza. He’s a man of probity and integrity,” said Roque.

The integrity of SolGen Francis Jardeleza