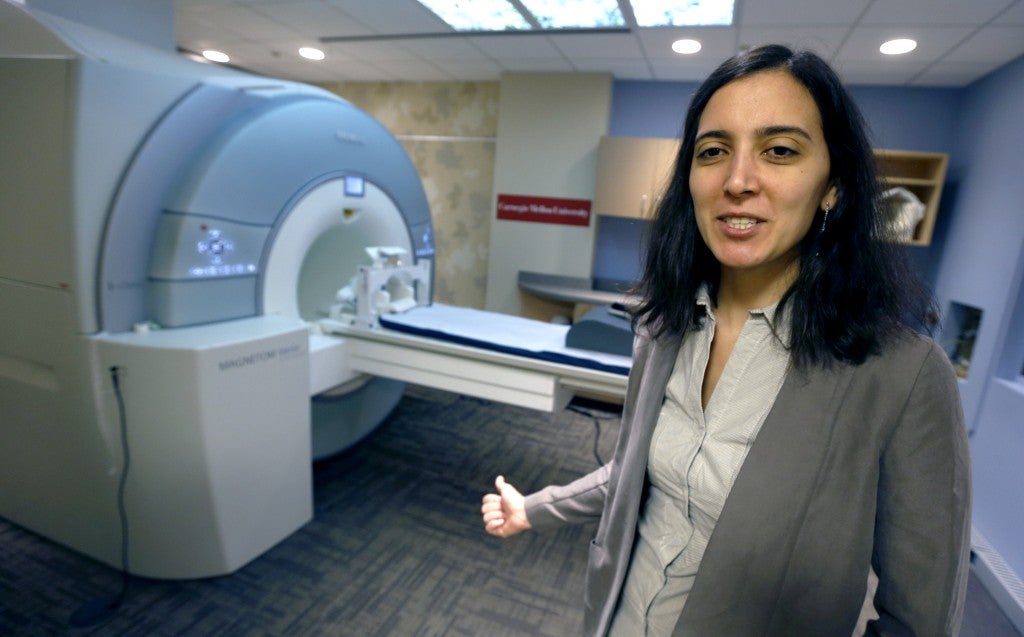 Leila Wehbe, a Ph.D. student at Carnegie Mellon University in Pittsburgh, talks about an experiment that used brain scans made in this brain-scanning MRI machine on campus, Wednesday, Nov. 26, 2014. Volunteers where scanned as each word of a chapter of “Harry Potter and the Sorcerer’s Stone” was flashed for half a second onto a screen inside the machine. Images showing combinations of data and graphics were collected. (AP Photo/Keith Srakocic)

WASHINGTON — Reading about Harry Potter’s adventures learning to fly his broomstick activates some of the same regions in the brain we use to perceive real people’s actions and intentions.

In a novel study, scientists who peeked into the brains of people caught up in a good book emerged with maps of what a healthy brain does as it reads.

The research reported Wednesday has implications for studying reading disorders or recovery from a stroke. The team from Carnegie Mellon University was pleasantly surprised that the experiment actually worked.

Most neuroscientists painstakingly have tracked how the brain processes a single word or sentence, looking for clues to language development or dyslexia by focusing on one aspect of reading at a time. But reading a story requires multiple systems working at once: recognizing how letters form a word, knowing the definitions and grammar, keeping up with the characters’ relationships and the plot twists.

Measuring all that activity is remarkable, said Georgetown University neuroscientist Guinevere Eden, who helped pioneer brain-scanning studies of dyslexia but wasn’t involved in the new work.

“It offers a much richer way of thinking about the reading brain,” Eden said, calling the project “very clever and very exciting.”

No turning pages inside a brain-scanning MRI machine; you have to lie still. So at Carnegie Mellon, eight adult volunteers watched for nearly 45 minutes as each word of Chapter 9 of “Harry Potter and the Sorcerer’s Stone” was flashed for half a second onto a screen inside the scanner.

Why that chapter? It has plenty of action and emotion as Harry swoops around on his broom, faces the bully Malfoy and later runs into a three-headed dog, but there’s not too much going on for scientists to track, said lead researcher Leila Wehbe, a Ph.D. student.

The research team analyzed the scans, second by second, and created a computerized model of brain activity involved with different reading processes. The research was published Wednesday by the journal PLoS One.

“For the first time in history, we can do things like have you read a story and watch where in your brain the neural activity is happening,” said senior author Tom Mitchell, director of Carnegie Mellon’s Machine Learning Department. “Not just where are the neurons firing, but what information is being coded by those different neurons.”

Wehbe had the idea to study reading a story rather than just words or phrases.

But parsing the brain activity took extraordinary effort. For every word, the researchers identified features — the number of letters, the part of speech, if it was associated with a character or action or emotion or conversation. Then they used computer programming to analyze brain patterns associated with those features in every four-word stretch.

They spotted some complex interactions.

For example, the brain region that processes the characters’ point of view is the one we use to perceive intentions behind real people’s actions, Wehbe said. A region that we use to visually interpret other people’s emotions helps decipher characters’ emotions.

That suggests we’re using pretty high-level brain functions, not just the semantic concepts but our previous experiences, as we get lost in the story, she said.

A related study using faster brain-scanning techniques shows that much of the neural activity is about the history of the story up to that point, rather than deciphering the current word, Mitchell added.

The team’s computer model can distinguish with 74 percent accuracy which of two text passages matches a pattern of neural activity, he said, calling it a first step as researchers tease apart what the brain does when someone reads.

From gaming to reading: Popular games turned into novels