The website of the Chinese Forestry Bureau and two university websites were defaced. As of Monday afternoon, the homepage of a university website bore the message “Greetings China! We are here to deliver you the people’s message from the Philippines.”

“Stop claiming what doesn’t belong to you! Stop the hunting of our marine endangered species! Go build your own island! Leave Philippines!” the message on the defaced site said.

On the Forestry Bureau site, the Blood Hackers Security inserted the message: “Leave Philippines Alone. The Spratly Islands belongs to the people of the Philippines.”

Last May 2014, 11 Chinese fishermen were apprehended off the coast of Palawan with at least 500 sea turtles onboard their fishing vessel.

After being charged in court for violating Philppine fishing laws, nine of the 11 fishermen were fined $102,000 each by a Philippine court in November. China has demanded that the fishermen be released unconditionally insisting they were within China’s territory.

China has been widely criticized for its territorial claim on the South China Sea and its reclamation activities in the Spratly Islands. 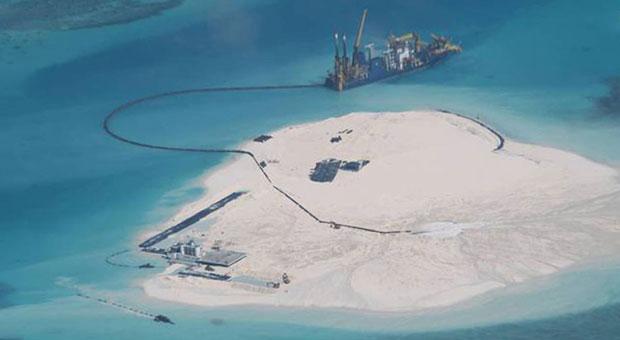 China’s reclamation on Johnson Reef in the Spratly Group of Islands.

Tensions rose in the Southeast Asian region due to the maritime dispute between the Philippines and China and several other countries claiming Spratly Islands.

The Philippines has already filed a case before the international tribunal on the law of the sea to protest China’s nine-dash line claim. China has refused to participate in the proceedings.