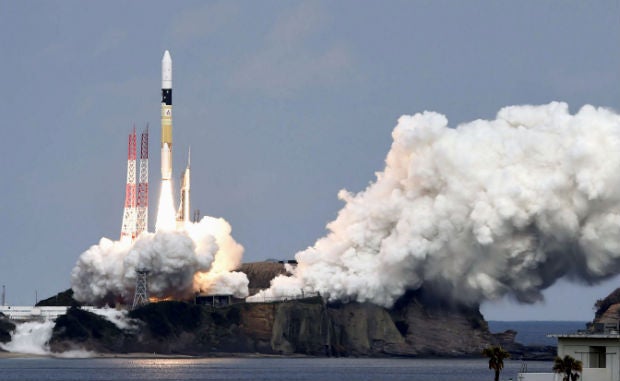 An H2-A rocket carrying space explorer Hayabusa2, lifts off from a launching pad at Tanegashima Space Center in Kagoshima, southern Japan, Wednesday, Dec. 3, 2014. The Japanese space explorer was launched Wednesday on a six-year roundtrip journey to blow a crater in a remote asteroid and collect samples from inside in hopes of gathering clues to the origin of earth. AP/Kyodo News

TOKYO — A Japanese space explorer has departed on a six-year roundtrip journey to blow a crater in a remote asteroid in hopes of gathering clues to the origin of earth.

The explorer is expected to reach the asteroid in 2018 and spend 18 months studying it before returning in 2020.

The research includes shooting a projectile into the asteroid to blast open a crater so the explorer can collect rock samples from inside.

Asteroids can provide evidence not available on earth about the birth of the solar system and its evolution. Japan’s space agency said Hayabusa2 will explore the origin of seawater and how the planet earth was formed.