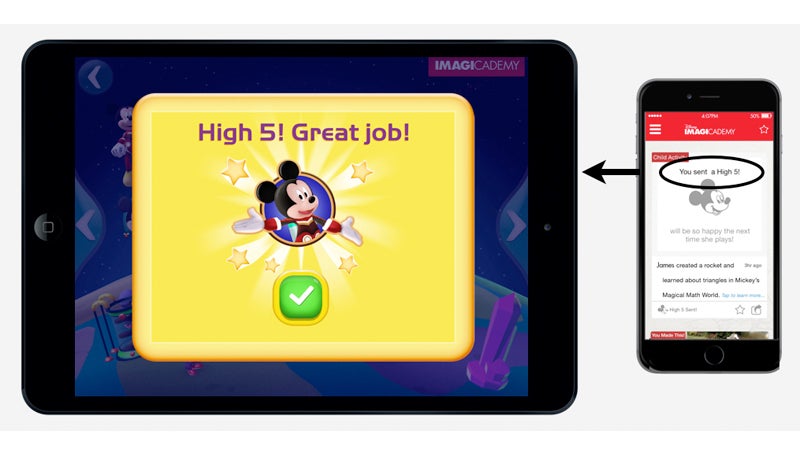 This product image provided by The Walt Disney Co. shows a Disney Imagicademy iPad app called “Mickey’s Magical Math World,” left, and a companion iPhone app for parents. The app, which will be released on Dec. 11, focuses on math-based activities such as counting, shapes, logic and sorting. The companion app lets grown-ups follow along with what their kids are doing even if they are using a separate mobile device. (AP Photo/The Walt Disney Co.)

NEW YORK  — The Walt Disney Co. is launching a new line of learning tools designed to help parents encourage kids 3 to 8 to learn outside of school. Disney Imagicademy begins with a series of mobile apps but will later expand into other products such as books and interactive toys. Over time, the target age will also grow to include older kids.

To start, Disney is launching an iPad app called “Mickey’s Magical Math World” on Dec. 11, focused on math-based activities such as counting, shapes, logic and sorting. Within the app, there are five add-on activities such as “Minnie’s Robot Count-Along” and “Goofy’s Silly Sorting.” The basic app is free to use, but the enhanced activities cost $4.99 each or $19.99 for all five. Future apps, on subjects ranging from life science using characters from Disney’s “Frozen” to creative arts, will be similarly priced. The apps are ad free, keeping with laws that prevent targeting online advertising at kids under 13.

A companion app for parents lets grown-ups follow along with what their kids are doing even if they are using a separate mobile device. It also suggests a bevy of offline activities, such as creating “rocket racers” using toilet paper tubes, duct tape and balloons, or making a colorful “quilt” out of tissue paper to learn shapes.

Disney’s entry into the learning app market comes at a popular time for educational apps, thanks to the proliferation of mobile devices and as more parents grow comfortable letting their kids use them, at least with limits in place. The American Association of Pediatrics estimates that children spend an average of seven hours a day on “entertainment media” that includes TVs, computers, phones and other electronic devices. It recommends no more than two hours a day spent consuming and engaging with “high-quality content.”

Disney Publishing Worldwide, the creator of Imagicademy and also the world’s largest publisher of children’s books, hopes that its content will meet the high-quality barrier that is entertaining as well as educational. Disney is betting that its brand recognition and the quality of its apps will help them stand out from a crowd of more than 100,000 learning apps aimed at kids. That said, there are other big name brands in the learning app space, including Sesame Street.

Bob Chapek, president of Disney Consumer Product, says what the company heard from parents is that it was difficult to find high-quality apps among the thousands out there. And once parents did find an app they liked, “there was no logical progression” to other levels and subjects.

“What really makes (Imagicademy) different is that it’s done with a very compelling curriculum-based approach,” he said. “And the fact that it’s based on characters and mythologies that kids love.”

Shortly after the math app, Chapek says Disney will launch a creative arts portfolio, then science, reading and social skills. The latter, he says, is “the outgrowth of our work with experts” who specialize in early childhood education and believe that social skills are as important as the “1,2,3,4,5 things” when it comes to learning.

Kara Norman, a mother of two and founder of Empower Her that focuses on supporting women and girls, said she likes that the apps show Minnie Mouse building a robot. She also appreciates the parenting portal of the apps.

“It’s helpful, especially for younger parents,” she said. “It’s hard to manage what your kids are doing but not take (the iPad) from them.”