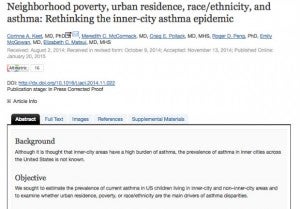 MIAMI, United States – A US study out Tuesday including more than 23,000 children has debunked the long-standing belief that living in the inner city raises the risk of asthma.

Instead, it found that being poor, African-American or Puerto Rican were more significant risk factors for asthma than urban living, said the findings by researchers at the John Hopkins University.

The study published in the Journal of Allergy and Clinical Immunology compared asthma rates inside cities to suburban and rural areas.

Parents and caregivers of more than 23,000 children, ages six to 17, answered survey questions about asthma in their homes.

The results showed that 13 percent of inner-city kids had asthma, compared with 11 percent of children living outside of inner cities.

When researchers accounted for other variables, like race, ethnicity and geographic region, the differences disappeared.

They found a strong association between poverty and asthma, in addition to African-American and Puerto Rican heritage.

As family income fell, asthma risk climbed. Researchers said the results showed that family poverty had a stronger influence on asthma risk than the poverty level of the surrounding neighborhood.

“Our results highlight the changing face of pediatric asthma and suggest that living in an urban area is, by itself, not a risk factor for asthma,” said lead investigator Corinne Keet, a pediatric allergy and asthma specialist at Johns Hopkins.

“Instead, we see that poverty and being African American or Puerto Rican are the most potent predictors of asthma risk.”

The rate of asthma among African-American children was 17 percent, and among those of Puerto Rican descent it was 20 percent, said the study.

Those figures were “disproportionately higher” than whites (10 percent), or Hispanics (nine percent) or Asians (eight percent).

Several decades ago, inner-city life was thought to raise the risk of asthma due to a number of factors, including pollution, pests and smoking.

But those risks are likely to be just as present in rural areas as they are in cities, experts said.

“Our findings suggest that focusing on inner cities as the epicenters of asthma may lead physicians and public health experts to overlook newly emerging ‘hot zones’ with high asthma rates,” said senior author Elizabeth Matsui, pediatric asthma specialist and associate professor of pediatrics and epidemiology at the Johns Hopkins University School of Medicine.