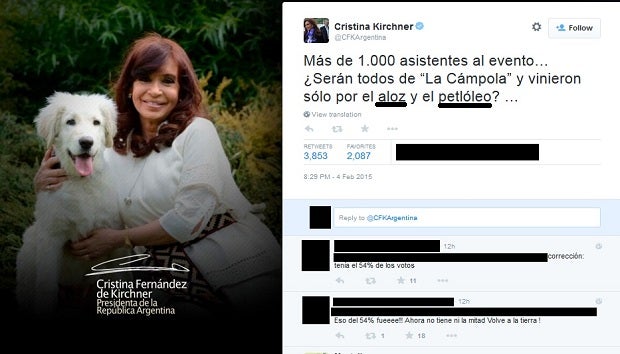 A screengrab of the Twitter post of Argentine President Cristina Kirchener shows (emphasis ours) how she changed the Spanish words “aroz” into “aloz” and “petroleo” to “petloleo.” Kirchener, who is in China seeking investments, was apparently trying to mimic how her Chinese hosts find it hard to pronounce the letters “L” and “R” in Spanish. SOCIAL MEDIA SCREENGRAB

BUENOS AIRES, Argentina — Argentina’s President Cristina Kirchner has risked offending her Chinese hosts, appearing to poke fun on Twitter at their difficulty pronouncing the letters “L” and “R” in Spanish.

Kirchner, already under the spotlight at home after the suspicious death of a prosecutor and on a mission to China to expand trade and political ties, tweeted in Spanish: “Are they all with La Campola?”

She was referring to La Campora, her party’s youth organization, led by her son.

“Or, are they only there for the lice (rice) and petloleum (petroleum)?” she tweeted.

It was a play on a political joke from home: her detractors say that her supporters only attend party events so they can get a free sandwich and a soda.

After the tweets triggered criticism and accusations of racism, she followed up with another saying: “Sorry. You know what? There is too, too much craziness and absurdity, only humor can get you through it.”

The tweets came as she met with Chinese President Xi Jinping.

The 61-year-old, Argentina’s first elected woman president, is a lawyer and former lawmaker who succeeded her husband, the late president Nestor Kirchner.

Kirchner said she had been determined to make the trip to China despite being advised not to travel by doctors because she is still recovering from breaking her ankle.

As of late Wednesday, there was no official response from China about the comments by Fernandez, a prolific tweeter who has 3.53 million followers.

But that didn’t stop the Twitterverse in the South American country and beyond from exploding with criticism of what many considered a racist tweet.

“Cristina Fernandez’s lack of tack and respect is incredible,” wrote @FaundezLafarga. “She goes to China looking for (economic) agreements and she makes fun of their accents.”

@GuyChazan wrote: “Faux pas in China. Really, this sort of joke went out of fashion in the 70s.”

The latest controversy comes as Fernandez struggles to distance herself from the mysterious death of prosecutor Alberto Nisman, who was found dead in his bathroom Jan. 18, hours before he was to elaborate on allegations that Fernandez helped shield Iranians connected to the 1994 bombing of a Jewish community center that killed 85.

Fernandez has vehemently denied the accusations, saying Argentina had nothing to gain from such a deal. She has suggested that rogue elements in the intelligence services ordered Nisman’s hit, but has not elaborated.

Earlier this week, just as her visit to China was getting underway, investigators looking into Nisman’s death said they had found an arrest warrant for Fernandez that Nisman had written up. While he never presented it, the revelations brought Fernandez back to the center of the case.