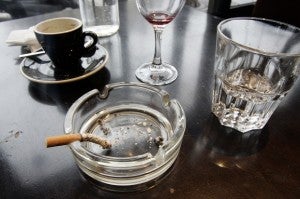 In this Thursday, Dec. 27, 2007 file photo, a cigarette burns out in an ashtray after lunch at a restaurant in Paris. According to a report released on Wednesday, Feb. 4, 2015, for the first time, lung cancer has passed breast cancer as the leading cause of cancer deaths for women in rich countries, according to the American Cancer Society based on new numbers from the International Agency for Research on Cancer. AP

For the first time, lung cancer has passed breast cancer as the leading cause of cancer deaths for women in rich countries.

The reason is smoking, which peaked years later for women than it did for men. Lung cancer has been the top cancer killer for men for decades.

“We’re seeing the deaths now” from lung cancer due to a rise in smoking by women three decades ago, said Lindsey Torre of the American Cancer Society. The society released a report Wednesday, based on new numbers from the International Agency for Research on Cancer.

Globally, there were about 14 million new cancer cases and 8 million cancer deaths in 2012, the most recent year for which numbers are available.

For men, lung cancer has been the leading cause of cancer death globally for several decades. In poor countries, breast cancer remains the top cancer killer for women. Colon cancer has grown as a cause of death worldwide.

As for the number of cases diagnosed, prostate and breast are the most common cancers in men and women, respectively, in rich countries.

Lung cancer became the top cancer killer for men in the 1950s, and for women in the late 1980s, reflecting trends in smoking rates.

Smoking rates have leveled off or dropped in rich countries. In the United States, “we are already seeing lung cancer death rates decline,” Torre said.

How to lower risk

The American Institute for Cancer Research says half of all cancers are preventable. Healthy diets and getting enough exercise cut risk. The hepatitis vaccine helps prevent liver cancer; the HPV vaccine lowers the risk of getting cervical cancer.

The biggest factor: Stop smoking, or don’t start. Quitting by middle age can avoid 60 percent of the risk of dying of lung cancer, Torre said.

“It’s never too late to quit.”

Cancer often due to bad luck, not genes or environment