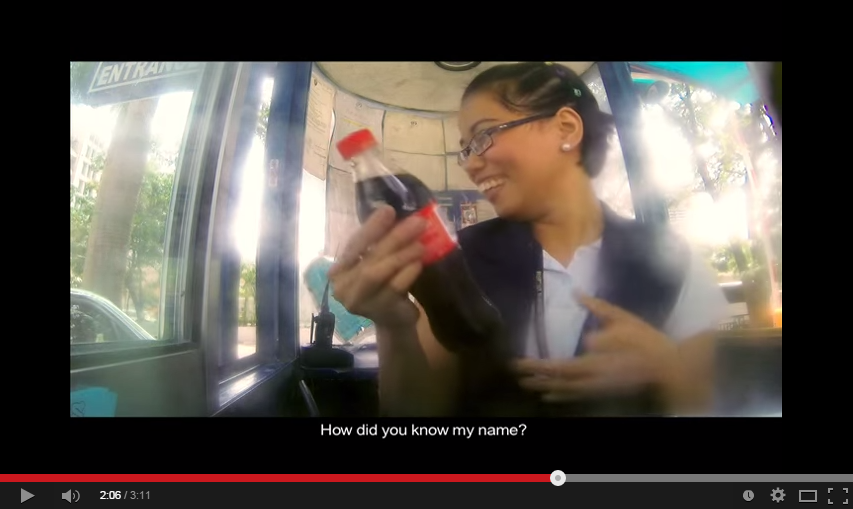 Screen grab of “The Happiest Thank You” ad from Youtube

MANILA, Philippines—The Top 10 ads that made it to YouTube Ads Leaderboard have a story to tell and each of them chose to touch on human emotions. Most of them succeeded in getting the audience’s attention either with a good or bad comment.

To come up with the list, YouTube gathered the combined popularity (organic views) and promotion (paid views) for the past 12 months. The list also reveals that people are actually looking at ads and viewing them at their entirety. Some are more than one minute long.

Anyone who is familiar with Coca-Cola Phils.’ previous commercials will not be surprised that its digital ad tackles values inherent to Filipinos anew. Its “The Happiest Thank You” ad is the most watched ad on YouTube.

The made-for-digital commercial shows ordinary people showing their gratitude to people they often see or interact in their daily lives. The most touching moment was when the participants were asked if they knew the name of the individuals they give honor to.

According to Google, the leaderboard is largely populated by ads that were born digital, with formats created specifically with YouTube’s audience in mind. The ad videos are “well beyond 30 seconds, and in fact three are past the four-minute mark. This offers a degree of creative freedom for brands—since viewers on YouTube will watch longer videos as long as there is a strong story.”

Ryan Morales, country marketing manager, Google Philippines, said that if an ad got past the five-second mark, then it had all the chances of being viewed in its entirety.

Google Philippines’ “Miss Nothing” tells of the lives of OFWs and their families. Surprisingly, it placed only eighth considering how it went viral around Chistmastime last year.

The ads revolve around the four themes of Filipino creativity, local heroes, global brands and global stories, and are specifically made for digital consumption.

“The YouTube Ads Leaderboard is a good opportunity for brands to showcase their understanding of the importance of digital marketing in connecting with consumers,” Morales said.

Unilever veered away from the usual tearjerker and cleverly touched on one of the most searched items on Google: hair. Unilever is one of the world’s leading consumer brands company with a large stake on hair products. As it partnered with Google for this particular ad, the company also learned that a large number of people search for how-to or do-it-yourself videos. Combining these two top search terms, Unilever came up with “DIY Fish Tail Braid—All Things Hair” which is more than three minutes long. It went all digital by featuring fashion blogger Angela Nepomuceno. It placed No. 3 in the list.

As the Internet has become a global platform to reach audiences from all corners of the world, it is not surprising that four of the ads in the list are by foreign brands. However, they share some similarities with the six Filipino brands: They resonate values and are heartwarming.

Partner puppies and a good concept together and you’ve got a winner ad. The Netherlands’ flag carrier KLM and its ad titled “Lost and Found Service” featuring a beagle became a trending video just a few months ago. “You can never go wrong with puppies,” said one observer.

Nike touched on the Fifa (Fédération Internationale de Football Association) fever with a really long ad featuring football superstars Cristiano Ronaldo and Neymar. Air New Zealand capitalized on the “Lord of the Rings” film fan base when it featured Frodo (played by Elijah Wood in the movies) in its safety features advisory.

Notably different is Samsung S5’s ad. It does not mess with human emotions. The Korean smartphone brand chose to present the product and its features in a straightforward and traditional way, and people actually watched it as it placed second.

On how these stories would connect to the business, Jollibee Corp.’s AJ Quiambao said that there was a conscious effort in making the brand and product stand out. The fast-food chain’s “Dito Masaya” featuring young boys showing the benefits of using its Happy Card (rewards card) placed 10th.