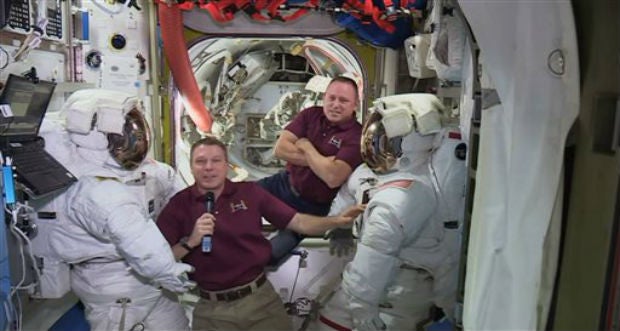 In this image from video made available by NASA, astronauts Terry Virts, left, and Barry Wilmore speak next to their spacesuits during an interview aboard the International Space Station on Wednesday, Feb. 18, 2015. AP

CAPE CANAVERAL, Florida — A series of upcoming spacewalks at the International Space Station will begin a day late.

The first spacewalk by a pair of U.S. astronauts was supposed to occur Friday. But on Thursday, NASA bumped it to Saturday to complete a spacesuit investigation.

The second spacewalk is now Wednesday; the third is March 1. The extensive, outdoor cable-routing work will prepare for the arrival of new commercial crew capsules in 2017.

Two critical fan and pump units for the astronauts’ spacesuits failed recently during routine maintenance in orbit. Engineers suspect water seeped into the bearings, causing them to corrode and seize up.

Both units were returned to Earth on the Dragon capsule last week. Spare units were put in the spacesuits, and those have checked out.

Nasa says a pump failure would cut short a spacewalk, but not endanger anyone. An unrelated problem with the same component led to an astronaut’s near-drowning in 2013.

Kenny Todd, a space station manager, said earlier this week that the corrosion is likely the result of frequent water sampling put in place after the 2013 episode.

Nasa astronauts Butch Wilmore and Terry Virts are the designated spacewalkers. The space agency would like to pull off all three spacewalks before Wilmore leaves the orbiting lab in mid-March.

Private companies SpaceX and Boeing are working on crew capsules — under Nasa contract — to ferry U.S. astronauts to and from the space station. Nasa lost the ability to launch its own crews when the space shuttles retired in 2011, and is paying Russia for crew transportation.