CIDG willing to probe child tied by mother like a dog 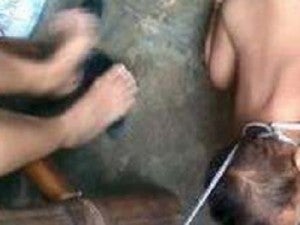 Photo shows a section of one of the viral social media photos of a baby tied like a dog. SOCIAL MEDIA SCREENGRAB

The Criminal Investigation and Detection Group of the Philippine National Police is willing to investigate the apparent child abuse incident involving a toddler who was put on a dog leash.

The photos of the child, which were posted on Facebook by the mother, went viral on social media and enraged netizens.

“As of now, we haven’t received any coordination from the Department of Social Welfare and Development, but we are willing to help them in the investigation,” Chief Inspector Elizabeth Jasmin, CIDG spokesperson, told reporters on Tuesday.

The photos showed a toddler tied like a dog while crawling on the floor. Beside the child was a blue dog food bowl.

Earlier, Justice Secretary Leila de Lima said the DSWD and the National Bureau of Investigation were coordinating to tackle the issue. For its part, the Commission on Human Rights had asked the DSWD to speed up its effort to get to the bottom of the case.

The CIDG, which supervises the PNP’s Women and Children Protection Unit, has recorded 14 cases of child abuse since January.

Jasmin said the increasing number of  cases of child abuse despite the campaign of the PNP, DSWD and other concerned agencies against it has been very alarming.

She said 70-percent of the cases of child abuse the CIDG handled involved family members of victims as the offenders.

“In the child abuse cases we’ve handled, most perpetrators are family members of the victim, if it’s not the mother, the victim’s mother, or his uncle. Other cases involved teachers and neighbors who verbally or physically abuses the child,” Jasmin said.

The police official added that child abuse offenders might face criminal charges with penalties of one to six months of imprisonment to reclusion perpetua, a jail term of up to 40 years.  AC