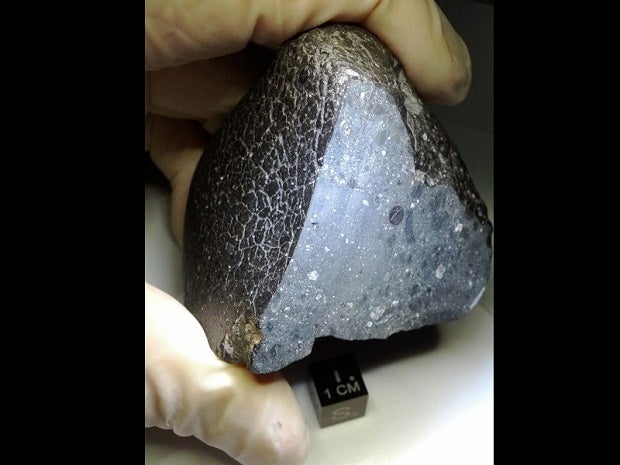 This photograph obtained January 3, 2013 courtesy of NASA shows a fist-sized meteorite nicknamed “Black Beauty,” which could unlock vital clues to the evolution of Mars from the warm and wet place it once was to its current cold and dry state, NASA said January 3, 2013. Discovered in Morocco’s Sahara Desert in 2011, the 11-ounce (320-gram) space rock contains 10 times more water than other Martian meteorites and could be the first ever to have originated on the planet’s surface or crust. AFP PHOTO

The steady stream of Earth-shattering collisions shortly after the birth of our solar system, ripped up the planet’s surface and altered the very composition of the rock we call home.

At the same time, those ancient meteorites called chondrites were adding to the Earth’s bulk, which like all planets form through a process of accretion—where material is pulled in by gravity, according to the study published in the journal Nature Communications.

While the Earth lost chunks as the meteorites crashed into it, it nevertheless experienced a net gain in mass during this violent period.

The finding is the latest in a long scientific quest to resolve a puzzle over the makeup of meteorites—building blocks of early Earth—and the chemical signature of our present-day planet.

Embryonic Earth some 4.7 billion years ago, the new research suggests, did in fact have the same chemical mix as at least one type of chondrite (called enstatite).

But the extended bombardment changed the chemical signature of the planet itself.

“Repeated episodes of production and erosion of the terrestrial crust removed large quantities of silicon, leaving the relative excess of magnesium we observe today,” the researchers concluded.

The crust is the outermost layer of Earth, a thin layer over the mantle, which itself covers the planet’s outer and inner core.

If scientists could extract samples from its deep layers, they might have a better idea of what a proto-Earth was made of.

But they have no choice but to rely on other evidence—including meteorites.

For the study, Asmaa Boujibar and colleagues at France’s National Centre for Scientific Research (CNRS) used lab experiments and modelling to test their theory.

They reproduced the conditions under which Earth’s primitive crust accumulated, by melting chondrites under various pressures.

The results, the study concludes, explains the makeup of the molten rock that eventually cooled into Earth’s crust.