How the universe’s brightest galaxies were born 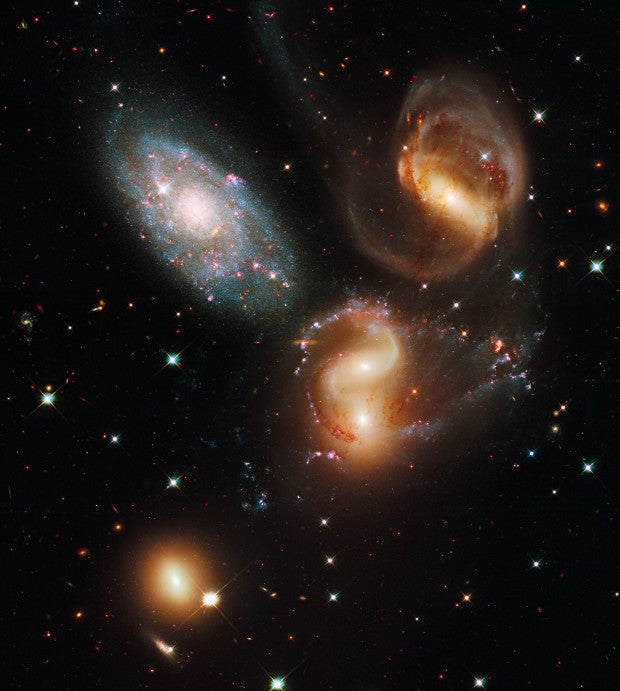 This image made by the NASA/ESA Hubble Space Telescope shows a group of five galaxies known as Stephan’s Quintet. The Hubble Space Telescope, one of NASA’S crowning glories, marks its 25th anniversary on Friday, April 24, 2015. With more than 1 million observations, including those of the farthest and oldest galaxies ever beholden by humanity, no man-made satellite has touched as many minds or hearts as Hubble. AP

PARIS, France—The brightest galaxies in our universe are fueled by what their gravity sucks in, not through explosive mergers of star systems as scientists previously argued, researchers said Wednesday.

In what may be the most complete explanation yet of how these enormous collections of stars and dust came to be, scientists found the galaxies pulled in hydrogen gas and then used it to pump out the equivalent of up to 2,000 Suns per year, according to a study in Nature.

By comparison, our own galaxy—the Milky Way—turns out stars at the rate of about one “Sun” per year.

The brilliant light put off by these so-called submillimetre galaxies (SMGs)—named for the part of the electromagnetic spectrum they use—is all but invisible to the naked eye.

“The massive galaxy grows via [pulling in] gas from intergalactic space and forms stars at a steady but large rate for nearly a billion years,” study co-author Desika Narayanan of Haverford College in the United States told AFP.

These galaxies date from the early days of our roughly 14-billion-year-old universe, but researchers have only known about them for a couple of decades.

Their brightness, which gives off 1,000 times the light of the Milky Way, is due mostly to their prolific output of stars.

Scientists disagree on how the SMGs were born, but one of the favoured explanations is that they result from massive galaxies slamming together and exploding into an intense burst of star-making.

But Narayanan says this theory can’t account for all the qualities of super bright galaxies, especially their relatively large sizes, since mergers tend to make rather compact galaxies.

To test their own gravity-based explanation, Narayanan and colleagues used super computers to simulate the creation of an SMG.

They found that the galaxies grew by pulling in gas that was then used to make stars which—because they were new—radiated exceptional amounts of light.

Mergers did not have a significant impact, even if SMGs can include clusters of galaxies which bump up their brightness, the study concluded.

“The galaxies collectively contribute to the local luminosity and render the system extremely bright,” Narayanan said.

The simulations were so complex that it took thousands of networked computers more than a month to do only a part of the calculations.

The team also ran models to track how light would move through these newly-created galaxies to see if the simulated outcome would resemble the real thing.

The researchers were astounded to discover that, according to their calculations, submillimetre galaxies remain super bright for almost a billion years.

Half of all stars may lie outside galaxies