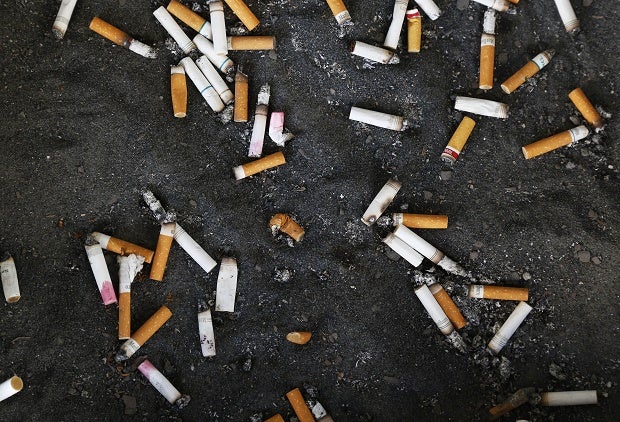 This Thursday, Sept. 17, 2015 file photo shows an ashtray with cigarette butts outside the Oklahoma County Courthouse in Oklahoma City. Researchers found that smokers who switched to special low-nicotine ones wound up smoking less and were more likely to try to quit, according to a new study published in the New England Journal of Medicine on Wednesday, Sept. 30, 2015. AP

A new study might help the push for regulations to limit nicotine in cigarettes. Smokers who switched to special low-nicotine ones wound up smoking less and were more likely to try to quit, researchers found.

The study only lasted six weeks, and researchers call the evidence preliminary. But they say it’s the first large study to show that slashing nicotine, perhaps below an addiction threshold, is safe and leads to less smoking.

The Food and Drug Administration was given the power in 2009 to mandate lower nicotine levels if it would help public health, but has not yet done so.

“This, I think, provides support” for lowering nicotine, said one study leader, Dr. Neal Benowitz of the University of California, San Francisco.

“What our study shows is that it’s feasible,” and that people won’t smoke more regular cigarettes to compensate, he said.

Results are in the New England Journal of Medicine. The FDA and the National Institute on Drug Abuse paid for the study. Two study leaders have advised companies that make smoking cessation aids, and two testified in tobacco lawsuits.

Smoking is a leading cause of heart disease and cancer. Tar and other substances inhaled through smoking make cigarettes deadly, but the nicotine in tobacco is what makes them addictive.

“We wanted to see how much lower it would need to be to see that effect,” where dependence did not happen or was diminished, said another study leader, Dr. Eric Donny, a University of Pittsburgh psychologist.

For the study, about 800 people who smoked five or more cigarettes a day and had no interest in quitting were assigned to smoke either their usual brand or an experimental type with nicotine ranging from a low of 0.4 milligram to 15.8 milligrams, the level in most cigarettes.

The cigarettes were provided for free, and no one except people assigned to keep smoking their regular brand knew how much nicotine any of their smokes contained.

Smokers had to report daily how much they smoked and to make 10 office visits, some of which included tests to measure nicotine exposure and dependence. They were paid $20 an hour or so for the visits and extra for completing tests and daily calls, up to $835 in all.

The low-nicotine users were a little more likely to smoke some regular cigarettes in addition to the ones provided in the study, yet the overall number of cigarettes and nicotine levels were lower in those groups. During the last week of the study, those given cigarettes with low amounts of nicotine — 2.4, 1.3 or 0.4 milligrams per gram of tobacco — were averaging 15 or 16 smokes a day. That compares to 21 or 22 cigarettes for those given the 15.8-milligram cigarettes or their usual brand.

One low-nicotine level — 5.2 milligrams — did not cause any change in number of cigarettes smoked from smokers’ usual brand.

The study was not intended or designed to get smokers to quit. But twice as many in the low-nicotine group than those smoking standard-strength cigarettes — 35 percent versus 17 percent — said they had tried in the month after the study ended.

A longer study is under way to see whether a gradual or abrupt shift to low-nicotine cigarettes is best.

Dr. Michael Fiore and Timothy Baker, tobacco researchers from the University of Wisconsin, Madison, wrote in a commentary in the journal that the study shows the potential for a policy to cut nicotine that “could help to end the devastating health consequences” of smoking.

The FDA declined to comment on the study, but the director of its Center for Tobacco Products, Mitch Zeller, said in a statement that “though all tobacco products are potentially harmful and potentially addictive, different categories of tobacco products may have the potential for varying effects on public health.”

Another take on electronic cigarettes