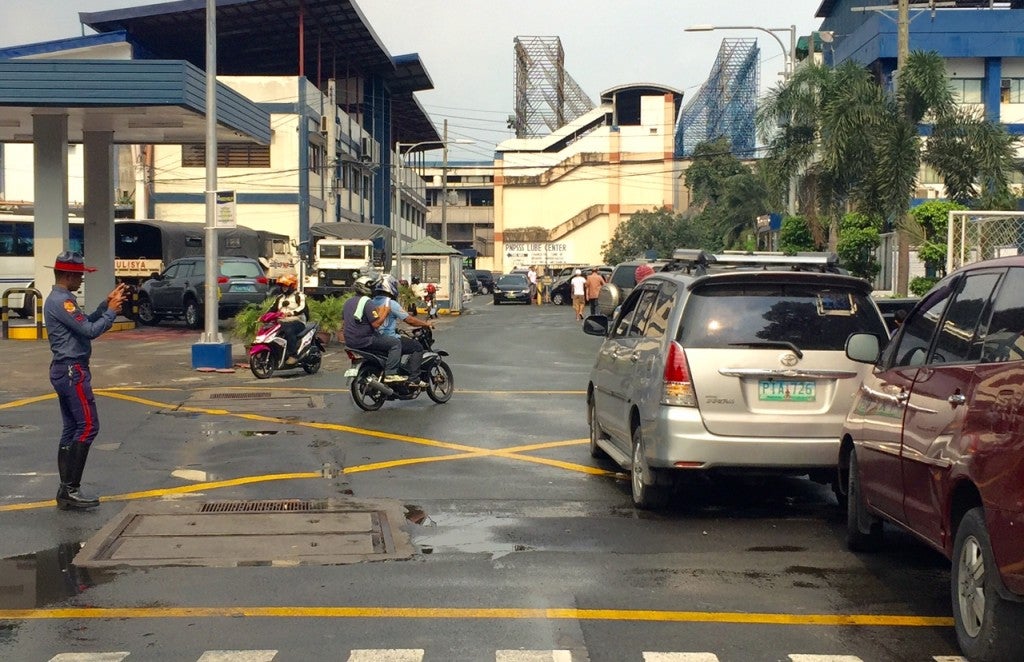 An HPG cop takes a photo of an “accident” inside Camp Crame to demonstrate the use of ‘Parak’ application. JULLIANE LOVE DE JESUS/INQUIRER.net

Not only guns, but Highway Patrol Group cops are now armed with tablets.

Clearing road accidents on Epifanio delos Santos Avenue (Edsa) is just one click away for the traffic cops on the major thoroughfare.

An application that would help speed up the clearing of vehicular accidents–being one of the main causes of road congestion–was developed for HPG cops manning the busiest highway in Metro Manila.

The app also requires cops to take photos of the car’s damage, which are among the requirements of insurance companies for insured vehicle owners to file claims in case there will be lawsuits.

On Wednesday, eight Cloudpad tablets embedded with Parak app were donated to the HPG in a simple ceremony in Camp Crame.

Six of the tablets will be given to HPG traffic enforcers assigned in the six choke points along Edsa, while the remaining two will be used by roving HPG patrolmen.

On average, about 25 to 60 vehicular traffic accidents occur daily on Edsa, contributing to the slowing down of traffic.

During the turnover ceremony, developers, including Lozada’s son John Moses,  from Galileo Software taught step by step the HPG cops how to use the application.

The app features a form that asks the user the fill out the “Investigator Data” including the investigator’s name, e-mail, rank, unit/group, birthday and address.

It also has an SOS button to call for tow trucks and ambulance and to dial the hotline of the cop’s respective police office.

The app will require traffic cops to take four angles–front, right, back and left view–of the car/s’ damage as well as the photo of the victim.

Persons involved in the accident will have to give their full name, cellphone number, and e-mail to the police, who will also take a photo of their license and the official receipt.

At the final step of the app, the investigator will be made to fill out the traffic incident report, including the statements of persons involved, which could be obtained through the app’s voice recorder.

‘Parak’ for motorists, too?

“Usually the settling and clearing road accidents usually take 10 to 15 minutes, [but] with this app, it will be reduced to less than 10 minutes,” Gunnacao told reporters after the turnover.

“We are grateful to Galileo who came up with this brilliant application to help us manage traffic condition, especially in clearing minor accidents,” he added.

But Gunnacao said, it would be more helpful if the app would be made available to motorists as well. This will allow them to document and take photos of the accident even without the investigator.

Although not present in the ceremony, Lozada in a statement explained why his company decided to create an app for the HPG.

“One of the reasons why accidents take longer to be resolved and reported is that the law requires a police investigator to be at the scene of the accident to write down the report, draw sketches before the involved vehicles can be moved out of traffic,” he said.

“We acknowledge the dedication and sacrifice of HPG in helping solve our traffic problem. We are one with them in finding solution to address congestions on our roads,” he added.