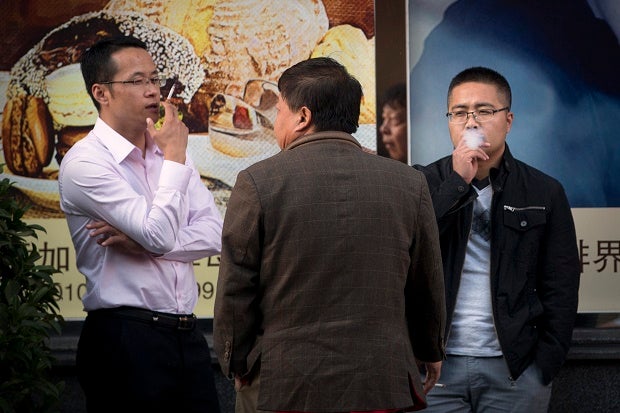 In this Thursday, Oct. 8, 2015 photo, men smoke cigarettes outside of an office building in Beijing. Research published in the medical journal The Lancet says one in three of all the young men in China are likely to die from tobacco, but that the number can fall if the men quit smoking. AP

BEIJING — Research published in the medical journal The Lancet says one in three of all the young men in China are likely to die from tobacco, but that the number can fall if the men quit smoking.

The studies, conducted by researchers from Oxford University, the Chinese Academy of Medical Sciences and the Chinese Center for Disease Control, show that two-thirds of the young men in China start to smoke, mostly before age 20, and that half of those would eventually be killed by tobacco unless they stop permanently.

The research, involving two studies 15 years apart and including hundreds of thousands of people, says the number of tobacco deaths, mostly among men, reached 1 million by 2010 and would hit 2 million by 2030, if current trends continue.

But researchers say the trends could be stemmed if the smokers quit.

“The key to avoid this huge wave of deaths is cessation, and if you are a young man, don’t start,” said co-author Richard Peto, from the University of Oxford.

Smoking rates have dropped significantly among men in developed countries. In the United States, about 20 percent the adult men smoke and 15 percent of women do, and cigarette smoking causes about one of every five deaths, said the US Centers for Disease Control and Prevention.

In China, the percentage of smokers among Chinese men has been on the rise in recent decades as cigarettes have become easily available.

As more Chinese people start to puff at younger ages, researchers expect the proportion of male deaths that are attributed to smoking to increase.

Around the world, tobacco kills up to half of its users, and more than 5 million of deaths result from direct tobacco use, according to the World Health Organization.

However, with tobacco an important source of revenue for the Chinese government, Beijing’s efforts to control tobacco use have in the past been compromised. Also, many people in China find it difficult to kick the habit in a culture where smoking has become so ingrained.

“It is difficult, because there is a lot of pressure at work, so I smoke to alleviate the tension,” Beijing office worker Wei Bin, 32, said in an interview.

“At the same time our country does not provide good support for people who want to quit. I have tried electronic cigarettes, but I think that is perhaps worse,” Wei said.

Some people are showing growing signs of awareness of the health risks.

“Three years ago, I used to smoke, but now I realize it is bad for health and also the environment, so I quit,” office worker Ma Huiwei, 35, said in an interview in downtown Beijing.

The research published in The Lancet shows that the number of young men smoking in China has increased, and the percentage of all male deaths in China that can be attributed to smoking is rising, while the younger generations of Chinese women have become less likely to smoke compared to those born in the 1930s.

Yet, researchers also worry that this downward trend among Chinese women might be reversed as other studies have shown more young women are taking up smoking recently.

The perils of smoking