Russian women on space test unworried about absence of men 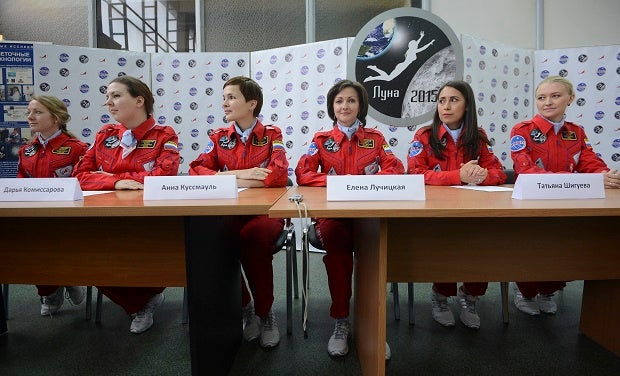 In this picture taken on Wednesday, Oct. 28, 2015, from left, Polina Kuznetsova, Daria Komissarova, Anna Kussmaul, Elena Luchitskaya, Tatyana Shuguyeva and Inna Nosikova attend a news conference before climbing into a mock-up spaceship to imitate an eight-day flight to the moon, in Moscow, Russia. The experiment launched Wednesday is intended to model the effects of confinement and stress of space travel. AP

MOSCOW — Before six Russian women began an eight-day simulation of a voyage to the moon, they had to answer a key question: How could they cope for such a long time without men or makeup?

The six women climbed into a mock-up spaceship Wednesday to imitate a lunar flight — an experiment to assess the effects of the confinement and stress of long space travel.

Russia’s space medicine center has conducted previous isolation experiments, including one in which six males spent 500 days in a cramped, windowless module to imitate a Mars mission.

Journalists asked the women if they were concerned about being away from men and cosmetics.

Participant Anna Kussmaul said “we’re working on fulfilling our tasks, and when you’re doing your work, you don’t think about men.”