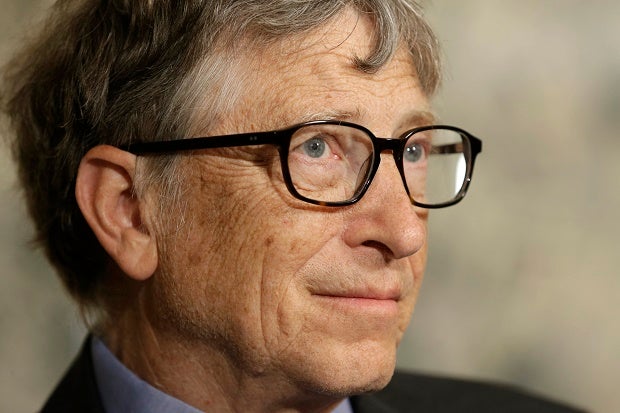 Bill Gates talks to reporters about the 2016 annual letter from the Bill and Melinda Gates Foundation in New York, Monday, Feb. 22, 2016. Bill and Melinda Gates, co-chairs of the largest private foundation in the world, has made a tradition of releasing an annual letter on philanthropy. This year’s edition, released Monday, called on the young to be a driving force for innovation and change.AP

NEW YORK — Bill Gates is supportive of investigators’ efforts to force Apple to help them crack into an iPhone used by one of the San Bernardino shooters, saying a balance needs to be struck between government access and the need to preserve data security.

While clarifying he doesn’t support untrammeled government access to personal data, the Microsoft co-founder’s position runs contrary to those of many tech executives who have backed Apple Inc. The heads of Facebook, Twitter and Google have all sided with Apple on the grounds that complying with the government’s request would ultimately undermine data privacy.

Gates stated in a handful of interviews that it’s not uncommon for phone companies and banks to hand over customer information to investigators. He questioned why tech companies should be treated differently.

In particular, he took issue with Apple CEO Tim Cook’s argument that helping crack the shooter’s iPhone would set a broader precedent.

“They are not asking for some general thing, they are asking for a particular case,” Gates, who remains a technical adviser to Microsoft Corp., told the Financial Times in a Tuesday interview.

READ: Facebook’s Zuckerberg ‘sympathetic’ with Apple’s fight with US authorities

And in a lengthy interview on Charlie Rose on PBS, Gates said that if government is “blind,” it might not be able to stop online crimes such as tax evasion, child pornography and, most importantly, terrorism.

He added in an interview with The Associated Press that public opinion will likely be on the government’s side, saying “I do think people want the government to act on their behalf if they feel like the safeguards are there.”

But Gates later on Tuesday said that he was being mischaracterized by the media as backing the FBI.

“The extreme view that government always gets everything, nobody supports that,” he told Bloomberg News. “Having the government be blind, people don’t support that.”

The county-issued iPhone 5C was used by Syed Farook, who with his wife, Tashfeen Malik, killed 14 people at an office holiday party in December before they died in a gun battle with police.

But Apple maintains that creating such software would set a dangerous precedent, threatening data security for millions by making essentially a master key that could later be duplicated and used against other phones.

READ: Majority of Americans back FBI in battle with Apple