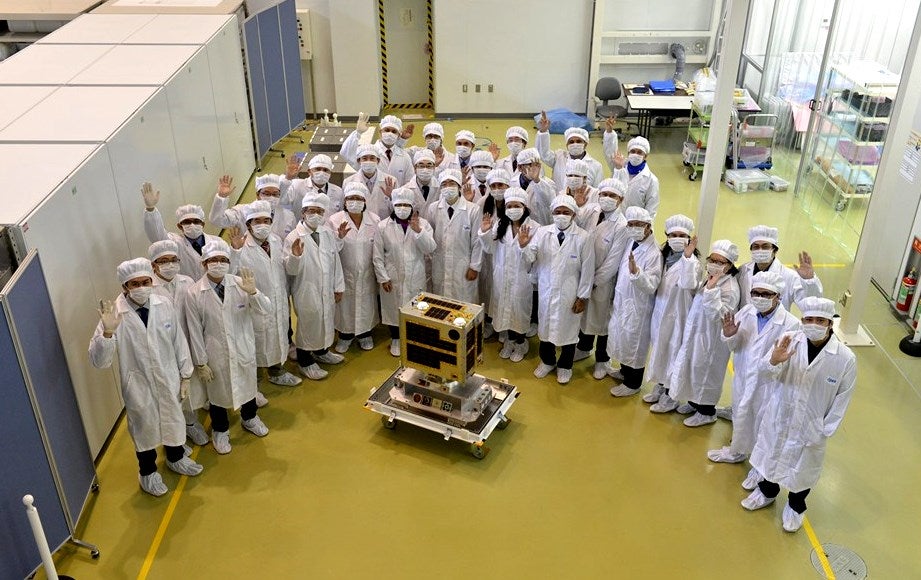 Filipino scientists from the University of the Philippines and the Department of Science and Technology pose with Diwata 1, the first Philippine-made microsatellite. PHOTO COURTESY OF DOST

It was part of the 3,375-kilogram cargo of food, crew supplies, vehicle hardware and 20 nanosatellites on board Orbital ATK’s Cygnus spacecraft that took off at exactly 11:06 a.m. (Manila time) from Cape Canaveral Air Force Station in Florida.

Cygnus, which blasted off Tuesday on the resupply run, was carrying 7,900 pounds (3.6 metric tons) of supplies to the station for the ISS crew of six astronauts, as well as components to support dozens of science and research probes.

The spacecraft was captured by the space station’s robotic arm, operated by crew members, and guided into its berthing port. The operation was over by 1452 GMT (10:52 p.m. Manila time).

“Our flexible Cygnus spacecraft has a lot of work left to do. Following its stay at the ISS, and for the first time, we will undertake three experiments onboard the unmanned spacecraft,” said Frank Culbertson, president of Orbital ATK’s Space Systems Group.

Diwata-1 will be in space for 20 months. It has four specialized cameras to take an average of 3,600 high-resolution images of the country that will be used to study weather patterns, disaster response and mitigation, and agricultural productivity.

Philippine officials said the launch of Diwata-1 marked the “first step (in) the challenge (of) venturing into space and developing our own space technology.”

Cygnus will stay with the ISS until May. After loading it with trash and once it is at a safe distance from the station, NASA engineers will set off a blaze inside the capsule to see how large flames behave in space.

NASA has set off tiny controlled fires in space in the past, but never tested how large flames react inside an orbiting space capsule.

Cygnus’ cargo also includes an instrument that, for the first time, will allow experts to evaluate, from space, the chemical composition of meteors entering Earth’s atmosphere.

It also carried a new 3D printer and a so-called Gecko Gripper, a mechanism similar to the tiny hairs on the feet of geckos that allows them to stick to surfaces.

This technology could one day be used on the hands and feet of robots that would move along the exterior of spacecraft to carry out inspections and repairs.

It is Orbital’s fifth supply mission to the ISS, as part of a $1.9 billion contract with NASA to deliver necessities to the astronauts living in space. With Agence France-Presse