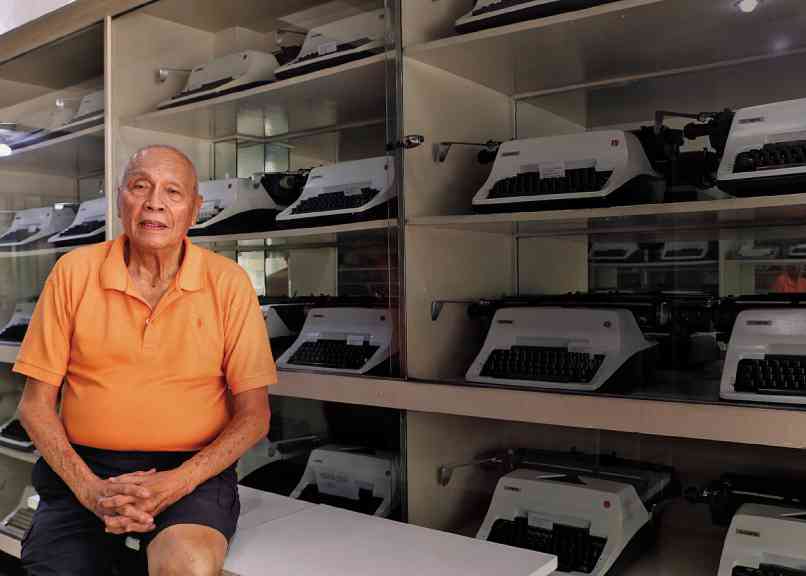 A BUSINESS kept running on two promises—one made by shop owner Ramon Avena to his father, Vicente

AT 83, Ramon Avena follows a routine. He wakes up at 5:20 a.m. and eats his oatmeal which he downs with coffee and pineapple juice. Before 7 a.m., he leaves his Quezon City residence for 2282 España Blvd. in Sampaloc, Manila, a short walk from the Welcome Rotunda.

There, in a four-story building built by his parents, he sits behind a desk as manager and owner of V. Avena & Sons, an office machine sales and repair shop. For him, it is both a place of business and a time-travelling chamber. For visitors, it can be a museum of sorts.

Avena, who rents out the commercial building to seven tenants, knows that not many customers enter his shop nowadays to buy a “makinilya” or have one repaired. Still, he dutifully looks after an enterprise entrusted to him by his father, Vicente.

Vicente originally opened up his shop on Calle Azcarraga (now Recto Avenue) in 1939. He first sold sporting goods, having played on the Philippine basketball and volleyball teams that won in the Far Eastern Olympic Games in the early 1900s.

But as typewriters started becoming an office fixture nationwide, Vicente changed his product line. And the young Ramon—the only boy in a brood of four (despite the “sons” in the company name)— was soon helping his father out as an all-around cleaner and handyman.

The shop went on to become a witness to history. The Japanese occupation shut it down but the years following Liberation brought it back to life. By 1965, it had transferred to España.

When martial law was declared in 1972, the family felt a “slowdown” in sales or job orders. Avena could only surmise that this must be due to the widespread censorship and closure of publication companies serviced by the shop.

Among the shop’s big clients during its heyday were Ateneo de Manila University, the Philippine School for Business Administration and Quezon Institute. “There were still typing schools back then,” Avena fondly recalled.

He had also personally tinkered with the typewriters used by then Senators Cipriano Primicias and Jovito Salonga.

But nothing prepared Avena for the gradual disappearance of the typewriter as offices and homes welcomed the arrival of the computer. The shift actually began in the country as early as 1960, when the Bureau of Lands acquired the early heavyweight models of the new technological marvel.

Inheriting the shop after Vicente died in 1993 at age 95, Ramon stood his ground as the next digital wave, the Internet, swept over the country the following year.

“I’m here because this store belongs to my parents. I made a promise,” said Avena, who has also preserved his late father’s office on the shop’s second floor, where Vicente’s books, diplomas and photographs remain.

As the Inquirer spoke with Avena one Wednesday afternoon in March, another elderly man lugging a defective typewriter rang the doorbell.  “I’ve been coming here since 1993,” said the man, the shop’s first and only customer that day.

Practically on the same age group, Avena and his increasingly rare clientele have also become friends. But younger ones occasionally show up with their parents’ dusty machines. 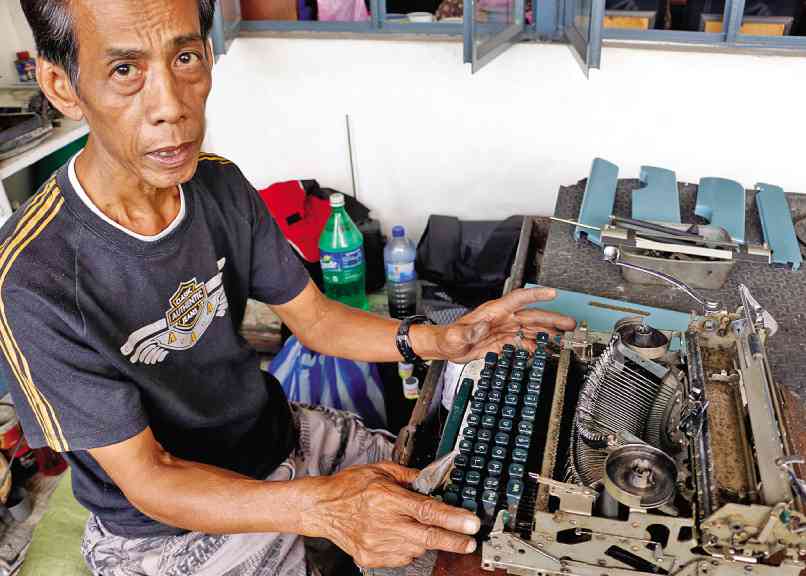 And then there are those who enter the shop just to take a look, with a sense of wonder and nostalgia, at the relics Avena keeps on his shelves.

Avena said his only son once suggested that they sell and repair computers as well. “But I don’t want to. To do that, you need to have technicians you can trust,” he added.

That trust has long been earned by 63-year-old Nemesio Matalang, who was just 18 when hired by Vicente as a helper and is now the only typewriter technician employed by Avena.

“When (Vicente) was still alive, he made me promise not to leave his son. So I’m keeping that promise,” said Matalang, who was busy that afternoon fixing and repainting a Remington belonging to Ligaya Fernando-Amilbangsa, a cultural dancer who was given the Ramon Magsaysay Award in 2015.

There is often a piece of history—or a personal story—in every old typewriter brought to his shop, but Avena knows that his father’s 77-year-old venture may soon have to close down; he has no intention of forcing any of his four children to take over just to keep it running.

“What you love cannot just be transferred to another person. I would not want this for anybody; it’s not easy,” he said. “As a livelihood, this is not the way to go. But I never looked at this in terms of money. It’s hard to explain, but I’m happy when I’m here because I feel like I’m still with my parents. From 7 a.m. to 6 p.m., time goes by without me noticing.”

With expert care, “typewriters can last forever,” he said.  “They have become part and parcel of my life. These are all material things; the legacy is what’s important.”

Remember the rotary phone or the typewriter?

A typewriter on fire, Aquino in a prison cell