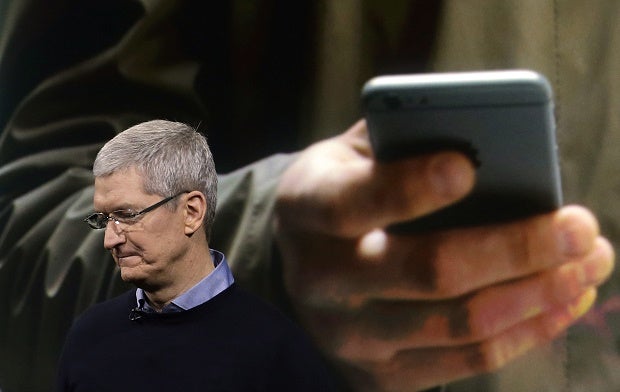 In this March 21, 2016, file photo, Apple CEO Tim Cook speaks at an event to announce new products at Apple headquarters in Cupertino, Calif. On Tuesday, April 26, 2016, Apple reported that quarterly revenue fell for the first time in more than a decade, as iPhone sales fell compared with a year ago. That’s putting more pressure on the world’s most valuable public company to come up with its next big product. AP FILE PHOTO

SAN FRANCISCO — Apple sold more than 51 million iPhones in the first three months of this year — and that’s the problem.

That’s 10 million fewer iPhones than the tech giant sold during the same quarter a year ago. As a result, Apple on Tuesday reported its first drop in quarterly revenue in 13 years — and the first-ever year-over-year decline in iPhone sales.

The slide is putting more pressure on Apple and CEO Tim Cook to come up with its next big product.

Cook, of course, has problems many corporate bosses would kill to have. Despite the decline in sales, Apple managed to rack up $10.5 billion in profit for the quarter.

“The future of Apple is very bright,” Cook told analysts on a conference call Tuesday.

But Apple is battling perceptions that its latest iPhones aren’t that different from previous models, at a time when overall smartphone sales are slowing around the world. Apple also sells iPads, Mac computers and other gadgets, but nearly two-thirds of its $50.6 billion in quarterly revenue came from iPhones.

“They need to come out with that next great product,” said Angelo Zino, a financial analyst with S&P Global Market Intelligence. Zino said that while he is optimistic about the company’s future, “Apple absolutely needs to start diversifying their revenue base.”

Overall, the company’s revenue in the January-March quarter was down 13 percent from a year earlier. And the company surprised analysts by forecasting another revenue drop of 13 percent or more in the current quarter.

The forecast, which was announced after Apple had closed for the day at $104.35 a share, drove its stock price down 8 percent in extended trading.

Apple hasn’t reported a year-over-year sales decline since 2003, when the iPod was still relatively new and the iPhone didn’t exist. Since then, the iPhone and other products have propelled the company’s stock value from $5 billion to $579 billion, making it the most valuable public company in the world.

Despite the quarterly decline, Chief Financial Officer Luca Maestri defended the iPhone business in an interview with The Associated Press.

“We think we can continue to bring a lot of innovation to the market,” he said of future models, while adding that Apple is working to expand other lines of business.

Apple’s revenue for the quarter included $6 billion from online services, apps and other software, he noted. That’s up 20 percent from a year earlier. Analysts agree the figure could rise further, given that there are more than 500 million iPhones in use.

Many were hoping the Apple Watch would be the company’s next big hit when it went on sale a year ago. Apple hasn’t revealed sales figures for the watch, but most analysts estimate the company has sold 12 million or more, producing well over $5 billion in revenue. That’s more than twice the number of iPhones sold in the first year after the product’s introduction in 2007.

While some owners say they’re delighted with the Apple Watch, others have voiced disappointment that it doesn’t do more. And critics say it hasn’t ignited consumer passions in the way the iPhone became a must-have product.

Apple said iPad and Mac sales both fell in the quarter. Meanwhile, the company is also widely believed to be working on other new products, such as virtual reality headsets and even electric cars.

“Do you remember when you were a kid and Christmas Eve, it was so exciting — you weren’t sure what was going to be downstairs? Well, it’s going to be Christmas Eve for a while,” he cautioned when asked about an Apple car in February.

Analysts are expecting Apple’s performance to improve in the fall, when it’s expected to release the next generation of iPhones with as-yet undisclosed new features.

For now, Apple is finding it difficult to match the blockbuster sales it racked up last year, when shoppers flocked to buy the first iPhones with larger screens — similar to the 5- and 6-inch models that Samsung and other competitors were already selling.

“I think what we’re seeing here is those tough comparisons” to last year’s sales figures, Zino said. “We’re also seeing a lot of consumers holding onto their old phones, until the iPhone 7 launch this fall.”

Colin Gillis, an investment analyst with BGC Financial, said smartphone sales are likely to level off rather than grow. As with PCs and tablets in recent years, he said, it’s becoming more difficult for manufacturers to come up with dramatic improvements that get shoppers excited.