Viral photo of smiling baby has a heartwarming story behind it 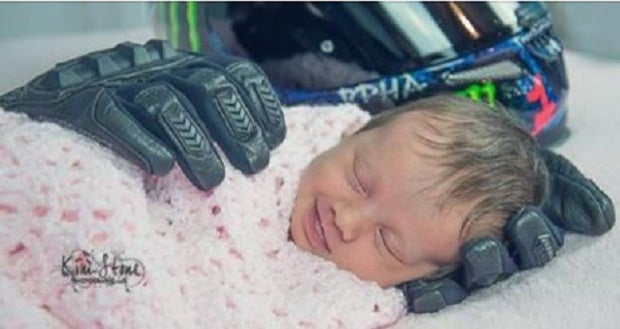 Netizens caught themselves smiling upon seeing a photograph of a newborn baby with motorcycle gear making the rounds online. But behind the baby’s sweet smile was a story that also touched the hearts of many.

A report from Good Morning America (GMA) said the photo of baby Aubrey was taken by Kim Stone of Marianna, Florida. The report said Stone was asked by her neighbor, Aubrey’s grandmother, to take the baby’s photos.

Aubrey’s father, Hector, a motorcycle enthusiast, was killed a month before his baby was born. Quoting local media reports, GMA said Hector’s body was found at a biker hangout.

“I wrapped the baby in her swaddle, a blanket her great-grandmother had made. I laid her there and put the helmet next to her. Then as soon as I laid the glove under her head, she began to smile,” Stone told ABC News as quoted in the report.

”I hadn’t even set up the lighting or anything else, but I grabbed my camera,” Stone added.

Aubrey’s mother, Kathryn, was sobbing behind Stone as she was taking the photo.

The photo became viral after it was posted online on June 10. It has been shared almost 75,000 times and has been liked more than 350,000 times.

Stone said she did not expect the photo to become viral.

“A viral photo is not what I was seeking. I just wanted to bring comfort to mom,” Stone said as quoted in the report.

”I do this everyday. But here, something special happened,” she said.

The report said Kathryn wrote a message to Stone in her blogpost.

“And I will screenshot the page in a few weeks and I’ll print it off for her to show her the WORLD prayed and wept for her and mommy and daddy. That God moved the WORLD for us. That daddy made an impact even after he was gone and that would be his dream. Every prayer from another is one less weight for me to carry,” she said.

“It’s one more piece of peace I have and one less tear I shed,” she added. NC/CDG