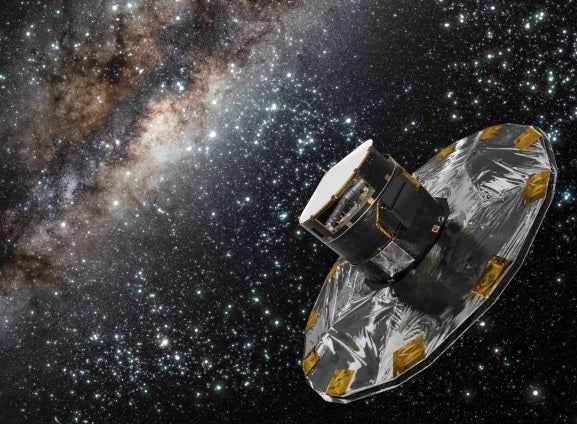 PARIS, France — The European Space Agency will unveil on Wednesday a three-dimensional map of a billion stars in our galaxy that is 1,000 times more complete than anything existing today.

A space-based probe called Gaia, launched in December 2013, has been circling the Sun 1.5 million kilometers (nearly a million miles) beyond Earth’s orbit and has been discreetly snapping pictures of the Milky Way.

The satellite’s billion-pixel camera, the largest ever in space, is so powerful it would be able to gauge the diameter of a human hair at a distance of 1,000 kilometres, meaning nearby stars have been located with unprecedented accuracy.

Just over half-way through its five-year mission, Gaia’s two telescopes have located a billion stars.

That’s still only one percent of the Milky Way’s estimated stellar population, scattered over an area 100,000 light years in diameter.

But it is enough to keep professional stargazers busy for years to come, said Francois Mignard, an astronomer at France’s National Centre for Scientific Research and a member of the Gaia Science Team.

“Over the centuries we have sought to catalogue the content of the skies,” he told AFP.

“But never have we achieved anything so complete or precise — it is a massive undertaking.”

The first data dump “opens a new chapter in astronomy,” he added, and is certain to generate hundreds of scientific studies.

Gaia maps the position of the Milky Way’s stars in a couple of ways.

Not only does it pinpoint their location, the probe — by scanning each star about 70 times — can plot their movement as well.

This is what allows scientists to calculate the distance between Earth and each star, a crucial measure, explained Mignard.

Both types of data will be available Wednesday for more than two million stars.

“That’s 20 times more than what we had before,” Mignard said. “And all in one fell swoop!”

At the same time, it will collect vital data about each star’s temperature, luminosity and chemical composition, vastly expanding current knowledge.

Tens of thousands of previously undetected objects will be discovered, including asteroids that may one day threaten Earth, planets circling nearby stars, and exploding supernovas.

“It seems like a good bet that the mission will reveal thousands of new worlds,” Gregory Laughlin, an astronomer at Yale University, told the science journal Nature.

By identifying stars from smaller galaxies long ago swallowed up by our own, Gaia will also help scientists better understand the Milky Way’s origin and evolution.

Astrophysicists, meanwhile, hope to learn more about the distribution of dark matter, the invisible substance thought to hold the observable universe together.

They also plan to test Albert Einstein’s general theory of relativity by watching how light is deflected by the Sun and its planets.

“Gaia is going to revolutionise what we know about stars and the Galaxy,” David Hogg, an astronomer at New York University working on the project told Nature.

The spacecraft is controlled from the European Space Operations Centre in Darmstadt, Germany, using ground stations in Cebreros, Spain and New Norcia in Australia.

More than 50 companies across Europe were involved in building Gaia and its instruments.

Mission scientists are scheduled to brief journalists on some of the initial findings Wednesday afternoon.