Netizens agree: Miriam was the best president the country never had 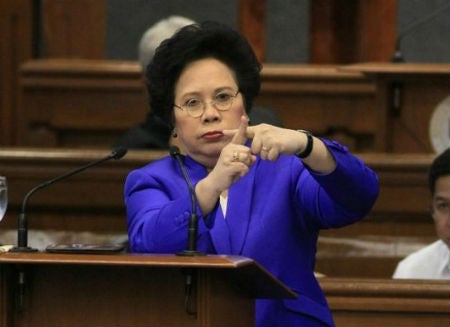 Netizens quickly branded Santiago “the best president we never had” and the hashtag #RIPMiriam began trending.

“Rest in peace, Senator MDS. Your intellect and fire will be missed in the halls of the Senate,” tweeted Abigail Valte, presidential spokesperson in the last Aquino administration.

“Hope the country takes a break from all the mudslinging and politicking and takes time to pay respects to @senmiriam. She will be missed,” tweeted former Comelec Commissioner Gregorio Larrazabal.

Santiago ran for the presidency thrice—in 1992 where she lost against Fidel V. Ramos, in 1998 which was won by Joseph Estrada, and in 2016 against Rodrigo Duterte who won. Her running mate was Sen. Ferdinand “Bongbong” Marcos Jr. who also did not win.

“You’ve done so much for our country. Thank you Senator Miriam Santiago for being the BEST president we never had,” tweeted Cristy Macaraeg.

“Senator Miriam Defensor-Santiago, a president we never had. Rest in peace. You served the Filipino people well. #RIPMiriam,” said @janrobertgo.

“There can only be one. #RIPSenatorMiriam,” Professional Heckler said.

“I always voted for her & made no secret about it. @senmiriam We will not forget your sharp wit, and unabashed love of country. Salamat po,” tweeted Gang Badoy Capati.

Served in all branches

Santiago served in all three branches of government—as a regional trial court judge during the martial law regime of strongman Ferdinand E. Marcos, as immigration commissioner and agrarian reform secretary in the Cabinet of President Corazon Aquino, and as a three-term senator beginning in 1995.

“With all the fuss in the senate presently happening, your intelligence, voice and personality is already missed…. Rest in peace Madam,” posted Jing de los Reyes.

“You’ve lived, you’ve fought, you’ve won, you’ve lost, and now you have to rest. Thank you Miriam for your services, sacrifices, and your time. We are grateful for having you as one of our greatest leaders,” Fester Cantores Caramto said.

Santiago was elected a judge in the International Criminal Court in 2012. She belayed her assumption to that bench when she became ill with chronic fatigue syndrome.

“If there’s one thing in my life I’m truly proud of, it’s voting for @senmiriam—a story I can tell even when I’m old & grey. #RIPSenMiriam,” tweeted Nixon Apun.

“It felt like I lost an old aunt or a grandma. It’s a sad sad day. #RIPMiriam,” said @robinxjames.

“Madam. Thanks for the realization as what we are and what we should be as Filipino,” said reader Mark Jesster Labrado Terado.

“Iron Lady of Asia, may you rest in peace #RIPMiriam,” said Jana Francisco.

And then there was also this: “In your tributes, remember the good and the bad. Miriam wasn’t perfect. There are reasons to like her, and reasons to dislike her,” tweeted Niko Battalones.