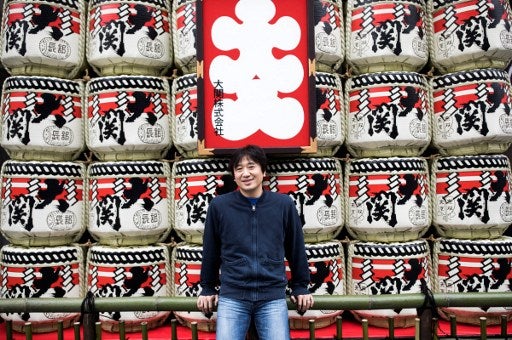 Japanese Shigetaka Kurita, the man who created emoji characters, poses for a portrait in Tokyo on November 30, 2016.
Kurita was working at major telecom NTT Docomo in 1999 when he sketched out one of the first emoji, a clunky looking thing barely recognizable as the precursor to today’s yellow smiley face. From a humble smiley face with a box mouth and inverted “V’s” for eyes, crude weather symbols, and a rudimentary heart — emoji have now exploded into the world’s fastest-growing language. / AFP PHOTO

TOKYO—From a humble smiley face with a box mouth and inverted “V’s” for eyes, crude weather symbols, and a rudimentary heart — emoji have now exploded into the world’s fastest-growing language.

There are now about 1,800 emoji characters — and counting. They cover everything from emotions and food to professions, are racially diverse and have become an integral part of the smartphone age.

READ: Facial expressions, food, jobs and gestures to take your emoji game to the next level

The digital hieroglyphics are regarded as so significant that New York’s Museum of Modern Art, which is home to works by Andy Warhol and Pablo Picasso, is exhibiting the original 176 designs.

Shigetaka Kurita, the man who created these characters, is still surprised by the success of his idea, but says he was meeting an obvious need.

“It wasn’t only Japanese who felt inconvenienced when they were exchanging text messages. We were all feeling the same thing,” he tells Agence France-Presse.

Kurita was working at major telecom NTT Docomo in 1999 when he sketched out one of the first emoji, a clunky looking thing barely recognizable as the precursor to today’s yellow smiley face.

Kurita was also experimenting with how to make information, such as weather forecasts, more accessible on the small screens of emerging cellphones, deciding visual aids would help. The sun and umbrella symbols — both open and closed — were among his earliest creations.

Keenly aware of how text messages could be misconstrued, he wanted to create visual accompaniments to help articulate tone.

“With a heart, the message can’t be negative whatever the text says,” Kurita explains, describing his motivation to include the sign.

This month Kurita is going to New York to visit the exhibition honoring his creation, whose name is a combination of the Japanese words for pictures and letters.

“These 12 x 12 pixel humble masterpieces of design planted the seeds for the explosive growth of a new visual language,” Paul Galloway, a design collection specialist at the museum, wrote on its website.

Among Kurita’s ideas for original emoji was a pile of feces.

“I made poo. It’s childish but I thought it’s good to have something that makes people chuckle,” he said.

“The company turned it down for the sake of its corporate image.”

Today, a smiley-faced poop is one of the world’s most popular emoji, though according to the emojitracker website, a face with tears of joy is the symbol that is used the most.

Despite being popular in Japan around the turn of the century, it took another decade for emoji to really take off globally.

Their success is in part due to the soaring popularity of smartphones, which has resulted in a jump in mobile messaging.

Around 2010, a consortium of tech firms adopted a standardized table so emoji could be used across different platforms. Subsequently they became available on the iPhone and there was no turning back.

They’re now found in every type of online communication, whether it’s tennis star Roger Federer using them to announce his comeback from an injury or Australian Foreign Minister Julie Bishop sending an angry red face to describe Russia’s Vladimir Putin.

Reality star Kim Kardashian, who has 88.9 million followers on Instagram alone, developed her own range of “Kimoji” symbols. There are also apps for users to create their own, personalized emoji and avatars.

It is estimated emojis are used by 92 percent of the “online population”, according to the 2015 Emoji Report, released by a digital marketing firm. In the same period the Oxford Dictionary chose an emoji as its word of the year.

This month, a London translation agency said it was advertising for its first “emoji translator” to help meet the “challenges posed by the world’s fastest-growing language”.

“We have turned a corner in writing, whereby phonetic script and visual symbols are being integrated more and more,” said University of Toronto anthropology professor Marcel Danesi, author of “The Semiotics of Emoji: the rise of visual language in the age of the internet”.

“In some ways, (emoji) have rendered communication much more fluid and effective.”

Kurita wonders what emoji will look like in 50 or 100 years.

“I don’t think they will disappear and a heart symbol will always be a heart, but I wonder how others will turn out,” he said.

Kurita, now a board member at internet services firm Dwango, didn’t get direct financial rewards for his creation.

“But it’s more than enough compensation to have the honor of them being added to MoMA’s collection and going down in history.”