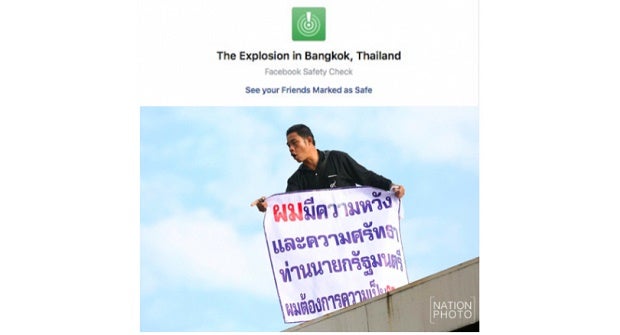 PHOTO FROM THE NATION

Facebook on Wednesday issued a statement explaining the activation of its “Safety Check” feature, which triggered a false alarm on Tuesday about an explosion in Bangkok.

In fact, the “explosion” was a barrage of firecrackers hurled at Government House by a single protester on Tuesday morning.

In a statement, Facebook said the Safety Check was activated on the basis of confirmation by a third party of the supposed blast.

“As with all Safety Check activations, Facebook relies on a trusted third party to first confirm the incident and then on the community to use the tool and share with friends and family,” the statement said.

The social-media network’s alarm caused many people to ensure their safety before Facebook realized the error and deactivated the feature.

“The Safety Check for this crisis has been turned off,” Facebook wrote on its Safety Check page regarding the false alarm in Bangkok.

The incident caused speculation in the Thai online community that it was a false alarm but Facebook did not mention this in its statement.

The Safety Check tool was launched by Facebook in October 2014. It allows users to let friends know they are safe and lets others check on the status those who may be in the affected area.

The first time the tool was activated for an event other than a natural disaster was during the Paris terrorist attacks of November 2015.

Last month, the social-media company announced that Safety Check would be activated by the community instead of Facebook so that more people could use the tool whenever they felt they needed it. This allows Safety Check to be used by more people more often no matter how big or small the crisis is.

“With every activation, we are continuing to learn how to make Safety Check better for communities in need and continue listening to feedback to make the tool more useful and relevant in future,” Facebook said.