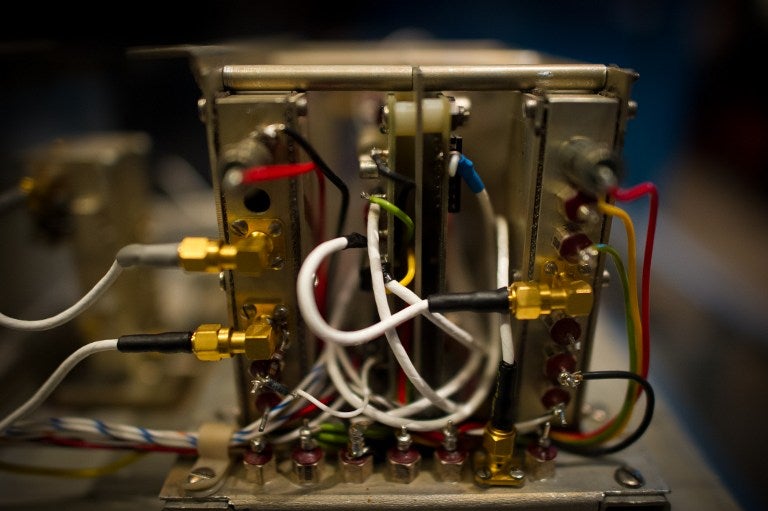 The interior of a 1970 “atomic clock” designed to work in the space, exposed at the “Time and navigation” exhibition at the Smithsonian National Air and Space Museum in Washington, April 10, 2013. The exhibition explores how revolutions in timekeeping over three centuries have influenced how people find their way. This project is a collaboration between two of the Smithsonians largest and most popular museums: the National Air and Space Museum and the National Museum of American History. AFP FILE

PARIS, France — As if 2016 has not been long enough, the year’s dying minute will last an extra second to make up for time lost to Earth’s slowing rotation, timekeepers say.

For others, the timing will be determined by the time zone they live in, relative to UTC.

“This extra second, or leap second, makes it possible to align astronomical time, which is irregular and determined by Earth’s rotation, with UTC which is extremely stable and has been determined by atomic clocks since 1967,” the Paris Observatory said in a statement.

The adjustment is necessary because Earth’s rotation is not regular — it sometimes speeds up, sometimes slows down, but is gradually slowing overall.

This is caused by factors including the Moon’s gravitational Earth-braking forces, which give rise to the ocean tides.

The result is that astronomical time — based on the length of an Earth day —  gradually falls out of sync with atomic time — which is measured by nearly 400 super-accurate atomic clocks dotted around the world.

Atomic time or TAI, in turn, is used to determine UTC, used for civil timekeeping globally.

TAI is exactly 36 seconds ahead of UTC, a difference that keeps growing as leap seconds are added, and will reach 37 seconds on January 1.

When leap seconds were introduced in 1972, 10 seconds had to be added to UTC, followed by another roughly every 18 months thereafter, according to the National Institute of Standards and Technology (NIST) of the US Department of Commerce.

“Leap seconds are added in order to keep the difference between UTC and astronomical time (UT1) to less than 0.9 seconds,” the NIST website explains.

“Usually leap seconds are added when UTC is ahead of UT1 by 0.4 seconds or more.”

The process, it added, can create problems for data logging applications and telecommunications systems.

“Special attention must be given to these systems each time there is a leap second.”

2016 — annus horribilis for many with its rash of celebrity deaths and political upsets — has also had a leap day — February 29 — a four-yearly occurrence to keep the calendar synchronized with Earth’s movement around the Sun. CBB