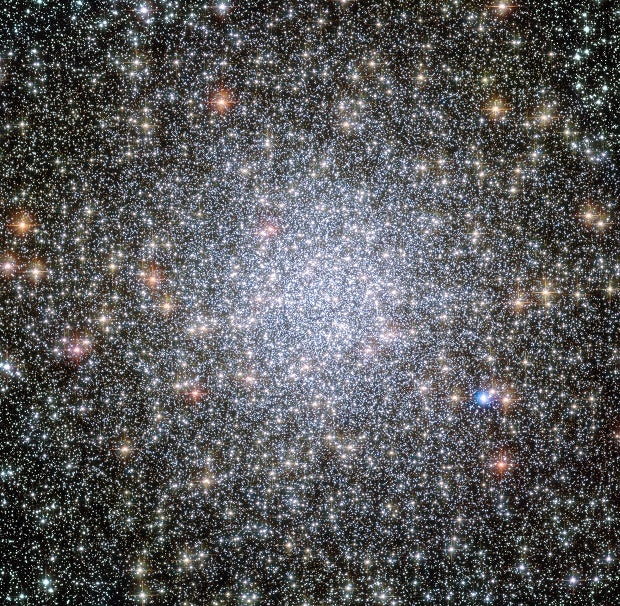 This undated image made available by NASA shows the globular star cluster 47 Tucanae photographed by the Hubble Space Telescope. On Wednesday, Jan. 6, 2016, Rosanne DiStefano of the Harvard-Smithsonian Center for Astrophysics in Cambridge, Massachusettes, said that clusters of stars on the fringes of our Milky Way galaxy may be home to intelligent life. DiStefano presented her theory at the American Astronomical Society’s annual meeting in Kissimmee, Florida. AP FILE

PARIS, France — A mysterious type of radio wave from deep space, discovered only a decade ago, has been traced to a precise source for the first time, astronomers said Wednesday.

So-called fast radio bursts (FRBs) picked up in 2016 by a telescope in New Mexico likely emanated from a dwarf galaxy some three billion light years from Earth, the scientists reported in the journal Nature.

FRBs flash only for a micro-instant, and can emit as much energy in a millisecond as the Sun does in 10,000 years.

Exactly what causes these high-energy surges of long waves at the far end of the electromagnetic spectrum remains the subject of intense debate.

The new discovery will not settle the issue, but it definitively eliminates several theories that had been in the running, scientists said.

There have been 18 fast radio bursts registered since 2007, but only one — observed in 2012 at the Arecibo Observatory in Puerto Rico, and dubbed FRB 121102 — recurred numerous times.

That prompted a team of scientists led by Shami Chatterjee of Cornell University to prepare in case it happened again.

The idea paid off: in 83 hours of observation over six months, the Karl G. Jansky multi-antenna array of radio telescopes — more powerful that any to have spotted a FRB in the past — detected nine distinct pulses.

“We now know that this particular burst comes from a dwarf galaxy more than three billion light years from Earth,” Chatterjee said in a statement.

The discovery does not answer the core question of what produces these strange emanations that long escaped the notice of professional star-gazers.

“Still, even without a clear answer, the finding is a real game-changer,” said Heino Falcke, an astronomer at Radboud University Nijmegen in the Netherlands who was not involved in the research.

‘Not in our backyard’

Until recently, many experts speculated that FRBs are produced by cataclysmic events such as stars exploding into supernovas, or neutron stars collapsing into black holes.

While it is possible that these one-off scenarios also produce such bursts, all of them are inconsistent with multiple pulses such as those generated by FRB 121102.

“Before we knew the distance to any FRBs, several proposed explanations for their origins said they could be coming from within, or near, our own Milky Way,” he said.

Such a close source can now be ruled out — at least in this case.

“It’s not something in our backyard,” said co-author Casey Law, an astronomer at the University of California in Berkeley.

That still leaves plenty of room for speculation.

One of the top candidates, the astronomers suggested, is a neutron star — possibly a type known as a magnetar — surrounded by material ejected by a supernova explosion.

A neutron star — small but extremely dense — is formed by the gravitational collapse of a star not quite massive enough to produce a black hole when it explodes.

A magnetar is a type of neutron star with an extremely powerful magnetic field. CBB

TOPICS: Arecibo Observatory, Astronomy, fast radio bursts, FRBs, Galaxy, radio burst, Science, Space, technology
Read Next
Living close to major roads increases dementia risk — study
EDITORS' PICK
Mandaluyong fire put under control hours after it started
Leveling up your ‘lutong bahay’ with the kitchen companion you never knew you needed
Bato de la Rosa, Risa Hontiveros back bill increasing female recruitment quota in PNP
Quarantine violations still punishable despite deleted provisions in ‘Bayanihan 2’ – Bato dela Rosa
Someone from the Philippines can become $356 Million richer this Tuesday
Cherry Mobile teams up with Cloud Panda PH, launches online store
MOST READ
‘If I had not been SolGen, I will make you eat your words,’ Calida tells Coco Martin
5 car dealership outlets shutting down
51 percent of German firms holding back investments in PH, but not because of COVID-19
Senate OKs bill authorizing president to postpone opening of classes beyond August
Don't miss out on the latest news and information.