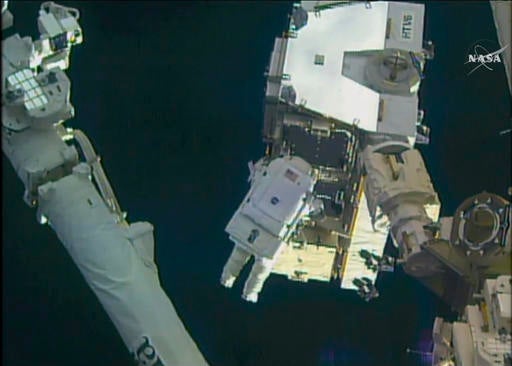 Before venturing out, Commander Shane Kimbrough and Peggy Whitson got a hand from a robot that took care of most of the grunt work.

Remotely using robotics aboard the 250-mile-high lab, flight controllers in Houston spent the past week replacing decade-old, nickel-hydrogen batteries with better charging lithium-ion ones. Handling all those batteries — each about half a refrigerator in size — was cumbersome and time-consuming.

On Friday, it was up to Kimbrough and Whitson to wire up the three new lithium-ion batteries, delivered last month by the Japanese. Spacewalkers will plug in three more next Friday, part of a long-term effort to energize the station’s aging solar power system.

NASA expects it will take two to three years to change out all 48 nickel-hydrogen batteries that make up the solar power system. The lithium-ion batteries are so efficient, only 24 will be needed altogether, saving space for other items during supply runs.

The space station’s robotic handyman, long-armed Dextre, removed the old batteries and popped in the new ones in a series of maneuvers that began on New Year’s Eve. Dextre — short for dexterous — also loosened bolts holding down special metal plates that were launched with the new batteries. Installing these plates, along with power and data cables, fell to Kimbrough and Whitson. 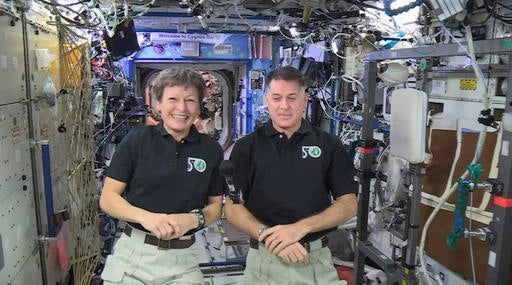 In this image made from video provided by NASA, U.S. astronauts Peggy Whitson, left, and Shane Kimbrough speak from the International Space Station during an interview on Tuesday, Jan. 3, 2017. The two are scheduled to perform spacewalks to replace batteries for the station on Friday and the following week. (NASA via AP)

NASA’s chief astronaut, Christopher Cassidy, said from Mission Control that sticky bolts often stymie astronauts, so everyone was grateful to hand over the chore to Dextre. Riding on the end of the station’s robot arm, Dextre and its 11-foot arms also made easy work of the battery transfers from one end of the station to the other, a distance spanning approximately half a football field.

“Most of that’s behind us,” Cassidy said as the spacewalk got underway, “and we’re looking forward to a relatively, hopefully, I don’t want to jinx us, but a smooth day of battery operation.”

Spacewalks are high-risk activities, NASA managers noted, and so reducing crew time outside is always preferable. In fact, almost as a reminder, Mission Control’s main contact for the spacewalkers was Italian astronaut Luca Parmitano, who nearly drowned in 2013 when his helmet flooded with water from his space suit’s cooling system. He directed Kimbrough and Whitson’s every move.

Most of the old batteries will be junked along with other station trash, burning up in the atmosphere later this month in the Japanese supply ship that delivered the new batteries. More lithium-ion batteries will arrive on future cargo craft.

Whitson, meanwhile, now ties the record for most spacewalks by a woman — seven. At age 56, she’s the world’s oldest and most experienced spacewoman ever. TVJ