A star may explode in 5 years, will be visible to the naked eye 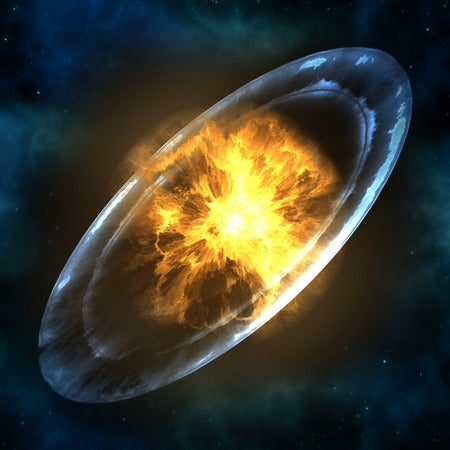 Scientists are anticipating one of the biggest astronomical events in mankind come 2022, as an exploding star is believed to engulf the night sky.

Located in the Cygnus constellation, the binary star system called ‘KIC 983222’ will merge and detonate into a sky of ‘red nova’ according to Calvin College in Michigan, USA and astronomer Lary Molnar, as per The National Geographic.

If the prediction comes to fruition, the star’s brightness will increase by 10,000-fold and become the shiniest object in the night sky. The phenomena will also be quite a sight for sore eyes, and will be easily visible without the aid of telescopes or binoculars.

“It will be a very dramatic change in the sky, as anyone can see it,” Molnar confirmed in the report. “You won’t need a telescope to tell me in 2022 whether I was wrong or I was right.”

Although the occurrence would signal the end of the celestial body, a new star will reportedly be born from its place in the Northern Cross formation.

Still, Molnar claims that he does not have an exact date for the cosmic phenomena, since this will be the first time that such prediction was made possible.

“It’s a one-in-a-million chance that you can predict an explosion,” he said. “It’s never been done before.”

Armed by a team of college students, the esteemed astronomer has been observing KIC 9832227 for several years with the help of colleagues Karen Kinemuchi from Apache Point Observatory in New Mexico and Henry Kabul from University of Wyoming.

The discovery first started when one of his assistants noticed that the two stars in the system shared an atmosphere, much like “two peanuts sharing a single shell.”

After calculating the heavenly body’s orbital period, the group found out that it could have the same fate as  ‘V1309 Scorpii’ star, which unexpectedly exploded in 2008.

KIC 9832227, however, will have a much bigger impact and its explosion is expected to be as luminous as the North Star, Polaris, which is currently the brightest among the constellations of the Ursa Minor.

Speaking about the potential gravity of the matter, dean for research and scholarship at Calvin College, Matt Walhout said: “The project is significant not only because of the scientific results, but also because it is likely to capture the imagination of people on the street.”

Walhout added that “[if] the prediction is correct, then for the first time in history, parents will be able to point to a dark spot in the sky and say, ‘Watch, kids, there’s a star hiding in there, but soon it’s going to light up.’” Khristian Ibarrola