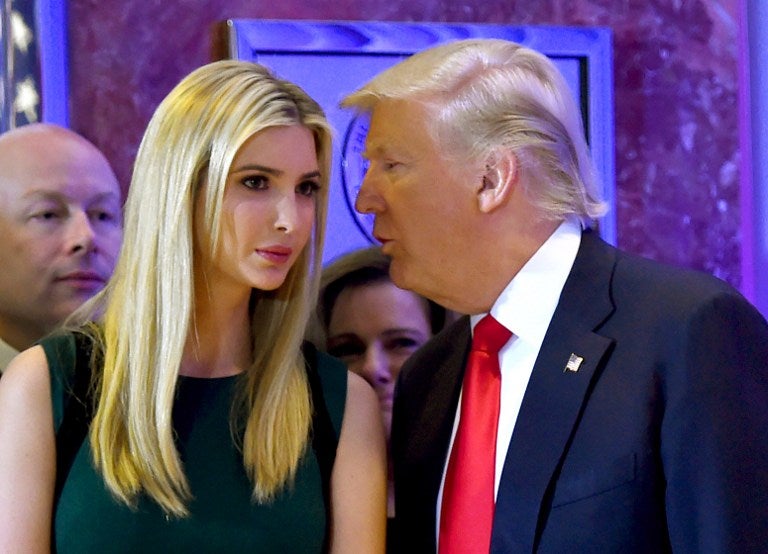 This file photo taken on Jan. 11, 2017, shows US President-elect Donald Trump whispering to his daughter Ivanka during a press conference at Trump Tower in New York. Trump on Jan. 16, 2017, thought he was sending a tweet to Ivanka, but mistakenly tweeted a british woman Ivanka Majic, a digital consultant in the seaside town of Brighton, formerly a digital leader for the Labor Party, according to The Guardian.  AFP

NEW YORK, United States — His daughter Ivanka may be Donald Trump’s favorite child but the president-elect apparently doesn’t know her Twitter handle, mistaking her for a British woman from the seaside town of Brighton.

On Sunday night, the Republican retweeted praise for his daughter from a Twitter user after CNN broadcast a profile of the incoming first daughter and wife of White House advisor in waiting Jared Kushner.

But instead of using the 35-year-old businesswoman’s @IvankaTrump handle, the Twitter user wrote @Ivanka — the account of Ivanka Majic — whose own account subsequently lit up with thousands of messages.

The New York billionaire, a prolific user of the social media site with more than 20 million Twitter followers, saw his post retweeted more than 6,600 times and liked more than 35,000 times.

Majic, who once worked for Britain’s opposition Labor Party and is now employed by the local council, decided to use her newfound prominence to hit back.

“And you’re a man with great responsibilities. May I suggest more care on Twitter and more time learning about #climatechange,” she replied to the president-elect in a message retweeted more than 3,360 times.

The former reality TV star, who has pledged to abandon the Paris climate deal, has yet to delete his tweet or publicly admit his mistake.

On Sunday night, his daughter seemed oblivious to the mixup, tweeting a photograph of herself dressed up saying “bright lights, big city #datenight.”

Majic said her identity was frequently mistaken during the US election campaign.

“Ivanka is an incredibly boring and popular Slavic girl’s name. The other one I get confused with is an Hungarian concrete company called Ivanka concrete,” the BBC quoted her as saying.

“I’m someone who has used Twitter since 2007. A new thing comes along and you create a username never thinking that one day Ivanka Trump’s dad will be president.”

Trump’s daughter, a businesswoman and entrepreneur whom lawyers say is stepping down as vice president at the Trump Organization, is moving to Washington with her husband and the couple’s three young children.

While no formal job title has been announced, she is expected to take on some hostessing duties and champion causes in a role more frequently associated with a first lady than a first daughter. CBB