Fil-Am brains of Snapchat among young US billionaires 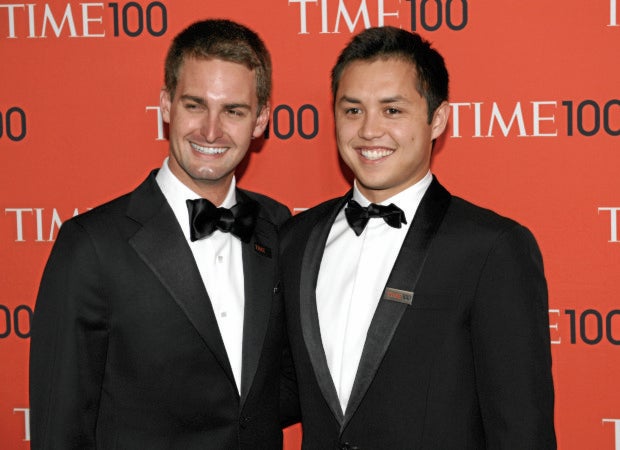 SAN FRANCISCO—The brains of Snapchat, whose mother is a Filipino, is the latest addition to the list of US billionaires.

The mobile application Snapchat became a social media star with messages that vanish after viewing, making cofounders Robert “Bobby” Murphy, a Filipino-American, and Evan Spiegel among the youngest billionaires on the planet.

Forbes now estimates Murphy and Spiegel to be worth about $4 billion each.

If Spiegel is the public face of the company, which is about to debut as a public company, Murphy may well be considered its brains.

The company was recently rebranded just Snap in an effort to be seen as being about more than one hit smartphone application.

Murphy, Snap’s technical director, is 28 years old and he is credited for the software that made Snapchat a hit.

Few details have surfaced about Murphy, a Stanford mathematics and computational science graduate.

His parents were local government workers in the city of Berkeley across the bay from San Francisco, according to a Forbes story.

Murphy’s mother, Rosie L. Go, migrated from the Philippines to the United States where she married Cornelius M. Murphy Jr.

Bobby Murphy met Spiegel in 2010 at the Kappa Sigma frat house of Stanford University. In an interview with Forbes, Murphy said that he and Spiegel were not “cool” so they “tried to build things to be cool.”

The history of the company fits into Silicon Valley lore with wealth for its creators as well as controversy regarding who gets credit for its genesis.

The startup, however, is based hundreds of kilometers from Silicon Valley in the Los Angeles beach town of Venice, known for surfers, body builders, bathing-suit clad roller skaters and sun-seeking tourists.

The image of Spiegel, Snap’s 26-year-old cofounder and chief, is far from that of a geek.

Media dives into Spiegel’s life paint a picture of a privileged childhood in the posh Pacific Palisades community of Southern California, a penchant for parties, and a celebrity fiancee, model Miranda Kerr.

Details from divorce documents filed by his parents, lawyers educated at prestigious US universities, included a then 17-year-old Spiegel arguing a need for an allowance of about $2,000 monthly to support his accustomed lifestyle.

He played his parents against one another to get a new BMW car, according to court paperwork.

At a conference at Stanford University in 2013, Spiegel acknowledge growing up with advantages.

“I am a young, white, educated male,” Spiegel said. “Life isn’t fair …. It’s not about working hard. It’s about working the system.”

He told of family connections making it possible for him to attend Stanford classes with Silicon Valley stars and to get a job at software company Intuit.

He wound up majoring in product design, but dropped out shortly before graduation time to devote himself to a nascent Snapchat startup.

The official version of Snap’s genesis is that Spiegel and Murphy were Stanford students who became friends in a fraternity and then invented Snapchat.

“We just thought it might be cool to make photos disappear,” Spiegel said at the Stanford conference in 2013.

However, a third fraternity brother, Reggie Brown, filed a lawsuit claiming that he was ousted from the startup after coming up with the idea the ghost-shaped logo and the original “Picaboo” name for the application.

Resolution of that case was not made public, but an apparent reference was noted in regulatory filings for Snap’s initial public offering (IPO) of shares.

Snap paid $157.4 million in 2014 to an unidentified “individual” to settle a legal dispute over intellectual property issues, the filing said.

That payout came the year after Spiegel and Murphy rejected a $3-billion offer from leading social network Facebook to buy Snapchat.

Following a Silicon Valley trend, going public will not reduce the two cofounders’ control over the company. Shares being sold to investors give ownership stakes but no voting rights.

“Picaboo” messaging application launched in 2011, was quickly renamed Snapchat and caught fire with teens who could embrace spontaneity without worrying images or messages would linger to haunt them.

A side effect was that it became seen as a “sexting” app.

By the end of last year, Snap boasted some 161 million people were using it daily.

In what could well be a first for an IPO regulatory filing, Snap refers to “sexting,” but only to stress that its smartphone application is for “much more” than sending risque pictures that vanish after being viewed.

Snap has announced it intends to “reinvent the camera” and has been expanding availability of its second product Spectacles sunglasses with built in cameras that sync to the smartphone application.

The company contends it can generate healthy and sustainable revenue with advertising aimed at its users, the bulk of whom are in a coveted demographic of people 18 to 34 years old. —AFP