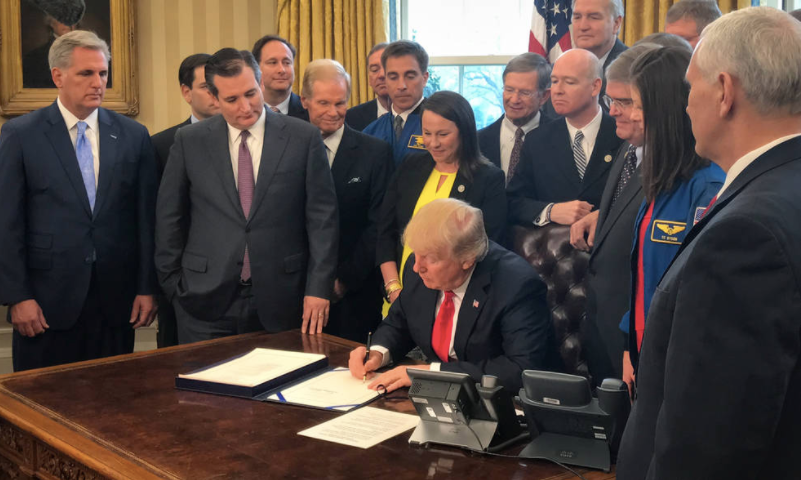 President Donald Trump, center, signs the NASA Transition Authorization Act of 2017, alongside members of the Senate, Congress and National Aeronautics and Space Administration in the Oval Office of the White House in Washington.  Photo from NASA website

The National Aeronautics Space Administration’s (NASA) space-exploration ambitions received a much-needed boost from US President Donald Trump after he signed the NASA Authorization Act of 2017 on Tuesday (Wednesday in Manila).

This is the first time in seven years that the US government passed a new long-term vision toward NASA’s goals, Business Insider reported.

“We would like to thank President Trump for his support of the agency in signing the National Aeronautics and Space Administration Transition Authorization Act of 2017,” the agency said in a statement.

“We also want to express our gratitude to a bipartisan Congress for its thoughtful consideration of the agency’s path forward. We are grateful for the longstanding support and trust of the American people, which enables our nation’s space, aeronautics, science, and technology development programs to thrive,” it added.

NASA promised to maximize the grant and continue striving for excellence.

“Our workforce has proven time and again that it can meet any challenge, and the continuing support for NASA ensures our nation’s space program will remain the world’s leader in pioneering new frontiers in exploration, innovation, and scientific achievement,” NASA said