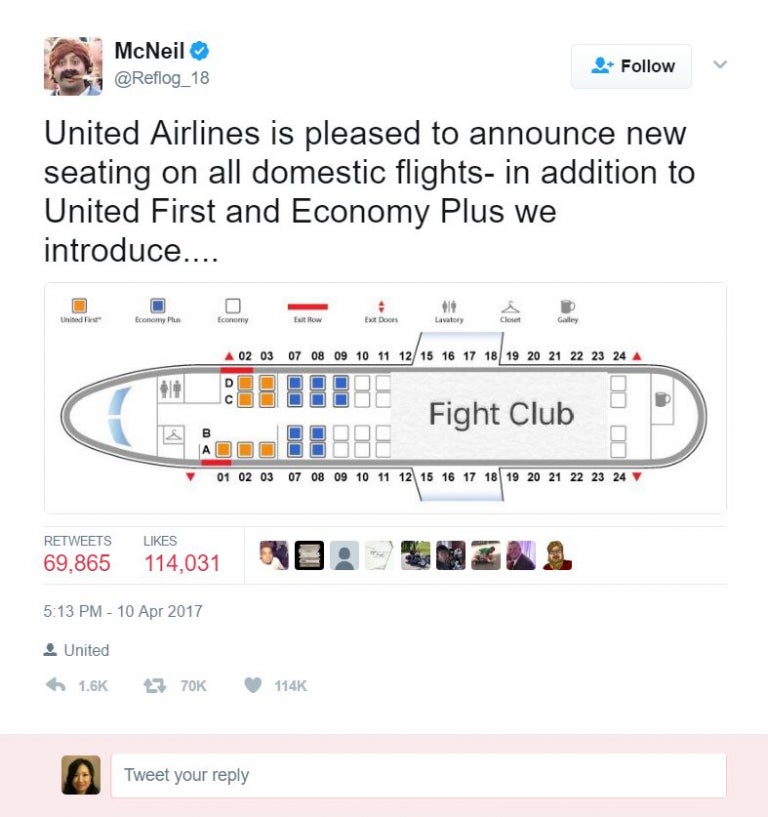 The internet trolled United Airlines hard after a video of a passenger being forcefully removed from his seat appeared online. Image: Twitter/Reflog_18 via AFP Relaxnews

The internet is having a field day with the shocking incident of a passenger forcefully dragged off an overbooked United Airlines flight, posting creative memes about the incident that has gone viral and caused an uproar.

Viral video footage captured by fellow passengers of a man being violently dragged out of his seat, striking his head against the armrest across the aisle and busting open his lip after he refused to deplane caused outrage on social media platforms. Following new images of the man’s bloodied face and United Airline’s tepid response to the incident, the furor shows no sign of abating.

On Twitter, uses have been expressing their anger in creative ways, causing the hashtag #united to trend in the United States.

One of the most liked and shared photos features a graphic of an airplane layout, dividing the cabins into United First, Economy Plus, Economy, and “Fight Club.”

“United Airlines is pleased to announce new seating on all domestic flights,” tweeted @Reflog_18. “In addition to United First and Economy Plus we introduce…”

The incident has also traveled around the world to China, where citizens are calling it an incident of targeted racism and urging a boycott of the airline on social media platform Weibo.

On Tuesday, #UnitedAirlinesforcespassengeroffplane was the top trending topic on China’s version of Twitter.

Other memes include “Southwest. We beat the competition. Not you.”, which references one of United Airlines’ chief competitors.

In a cinematic nod to the 1997 film “Air Force One”, another Twitter user suggested the United should use a clip of Harrison Ford as POTUS in an ad campaign, in which he mutters his signature line through clenched teeth, “Get off my plane.”

Also trending was a photo of “The Walking Dead” slugger Negan with his barbed baseball bat walking through the cabin.

“When you fly @united and they have overbooked your flight,” reads the tweet, along with a photo caption that says “Eenie…Meenie…” JB