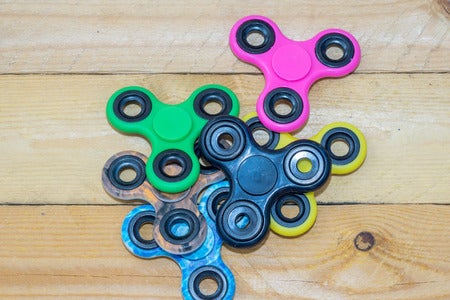 The popular hand spinners or fidget toys have been the latest craze among kids and adults alike.

The colorful hand-held toys have often been marketed as “stress relievers,” with presumed heath benefits that aid people who have trouble focusing—including those wth ADHD (attention deficit hyperactivity disorder), autism or anxiety.

However, a group of medical practitioners have debunked the claims, and voiced out their concerns regarding the ensuing trend.

“A lot of the patients I see, they might even be talking to me and they’re playing with the spinner, and looking right at it, and not actually answering the questions or doing what they need to be doing,” Dr. Rachele McCarthey, a psychiatrist at the University of Utah’s Behavioral Health Clinic, said in a KSL.com report.

Furthermore, McCarthey added that there remains to be no scientific evidence on whether spinners actually help kids focus inside the classroom.

Contrary to its supposed focus-enchancing qualities, the whirring and abundance of visual action might instead put too much attention to the gadget itself.

“Kids with ADHD can get really hyperfocused on things that they really find interesting, often to the exclusion of other things going on around,” she added.

“Things that are routine or have some demand, it’s much harder for children with ADHD to be able to pay attention,” he was quoted as saying. “And so, [the spinner] may well make things worse for them.”

Meanwhile, instead of giving children the fidget toys in class, McCarthey suggested some other alternatives.

An exercise ball to sit on during class, a putty (or squishy toy) to hold and squeeze, or a fidget cube which allows the child to squirm and wiggle in their hands. Khristian Ibarrola/JB

People are going gaga over Fidget Spinners and it now has an App!