Science Says: Why some airplanes don’t fly in high heat 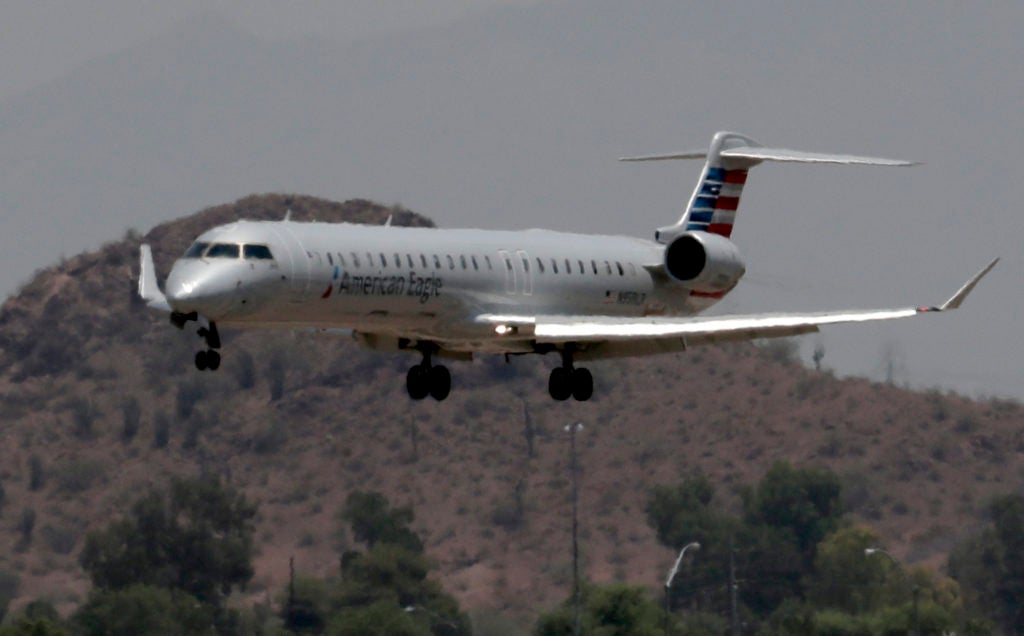 An American Eagle jet is seen through heat ripples as it lands at Sky Harbor International Airport, Monday, June 19, 2017, in Phoenix, Arizona. American Airlines cancelled dozens flights out of Phoenix today due to extreme heat. The cancellations are for operations by smaller regional jets that have lower maximum operating temperatures than full size jets. The smaller jets can’t operate when it’s 118 degrees or higher. AP

WASHINGTON, United States — When it comes to getting airplanes off the ground in broiling weather, it’s not the heat or the humidity. It’s the air density.

Hotter air gets thin, making it harder to take off and land safely, mostly for smaller jets. That’s what has kept some planes grounded in Phoenix this week where temperatures have been pushing 120 degrees.

READ: Cheering 1st day of summer? Not when 120 degrees is expected

Airplanes take off and stay aloft because of lift, the force from the movement of air underneath the plane’s wings that push it upward.

“As air warms up, it expands and there’s fewer molecules to be under your wing,” said Lou McNally, professor of applied meteorology at Embry-Riddle Aeronautical University.

To compensate, planes have to generate more thrust or power and have larger wings. Smaller jets that generate less thrust, like Bombardier’s CRJ regional jets, which have a 118-degree limit at Phoenix’s elevation, are more likely to be stuck in the heat.

At Dubai International Airport and other Gulf airports, which are used to hot weather, many flights — but not all — arrive at night and early morning to get around the heat problem. Gulf carriers also tend to operate longer flights using larger planes that aren’t as limited by high heat.

In Phoenix, temperatures around 118 are infrequent enough that airlines continue to use regional jets for shorter trips.

If a plane does try to take off beyond its temperature threshold, it may keep racing down the runway and not get up in time and have to abort. And if it tries to land when the air is too thin and hot, that’s not good either because it can run out of runway, McNally said.

Before they fly, pilots consult a sheet that tells them about the temperature, elevation and even humidity — factors that go into something called density altitude, a key measurement of flight conditions.

Airlines can take other steps when the temperature climbs too high. They can lighten the plane’s load by selling fewer seats — a tactic American Airlines is using in the Phoenix heat wave — or reducing cargo. They can take off with less than a full tank of fuel and then stop somewhere cooler to refuel.

The density altitude is the main issue, but there also could be simple heat issues on internal components like seals that might become too soft or even melt at higher temperature, MIT aeronautics and astronautics professor R. John Hansman said.