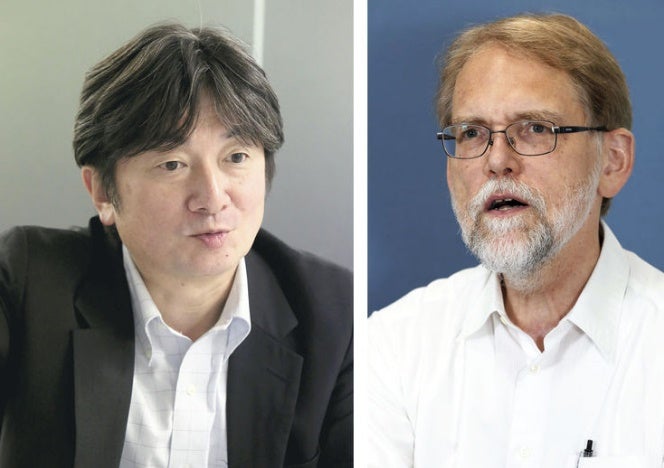 Considerable advances have been made in machine translation (see below) that utilizes artificial intelligence, to the point that it now, in some fields, provides the average English skill level of a university graduate. How much might machines be able to achieve in the future? For what purpose, and to what extent, should the Japanese develop their English skills? We asked an American translator who teaches English at a university and the president of a machine translation company about these issues.

Tom Gally / Professor at the University of Tokyo

Until now, machine translation has been used in place of a dictionary when reading and writing English, but it hasn’t been usable to comprehend or compose larger texts.

However, it also has weak points. It can’t check for mistranslations, mistakes or languages it doesn’t understand. Therefore, it shouldn’t be used for languages that we don’t understand ourselves.

The accuracy of AI translation is high for relatively formal texts, but it can’t be used for things like more casual texts, conversational text within novels, and song lyrics. Further, it does not translate with a firm grasp of the meaning of the text that it is translating. For example, translations such as “I was born in 2001, and my younger sister was born in 2000” can occur.

As can be seen from mistranslation examples such as this, the ability to discriminate correctly when translating such things as words with multiple meanings in context is not fully developed yet. However, as machine translation continues to improve, I think it is just a matter of time before such problems are solved.

Why do we currently teach English to all Japanese children? I think there are two answers to that.

The first reason is to build character: English for general education.

By gaining an understanding of overseas politics, economics, society and culture, and drawing comparisons with Japan, they can come to understand Japan better. Similarly, they can understand the Japanese language more deeply by comparing it with English. Using a language requires gaining an understanding of something, and the act of practicing English itself plays a role in intellectual training. These reasons apply not only to English, but could equally apply to other languages such as Chinese, Korean, Spanish or Arabic.

The second reason is that English is useful. It has practical uses, and allows global communication.

There are a wide variety of business uses for English, and it can also be used to communicate with foreigners visiting Japan. It further allows people to gather information from overseas reports. Ever since the Meiji period the original and main aim of Japanese people learning English has been to learn about overseas technologies. Another reason is to enable them to communicate with foreigners about themselves or Japan. Yet another reason is for entrance exams, and for English proficiency and TOEIC exams and qualifications.

The fundamental contradiction in Japan’s English education system is that all Japanese study English for many years, but there are few who really use it, or who can use it. Instead of learning just English for as many as eight years, or even 12 years, for many people it would be easier to rely on computers for translation and interpretation.

I think that the advancement of machine translation gives us a good chance to start the discussion about how to solve this contradiction.

(Born in California, Gally completed master’s degrees in linguistics and mathematics at the University of Chicago. In 1983, he came to Japan and studied Japanese, and also began Japanese-to-English translation, lexicography and other activities. He started teaching full time at the University of Tokyo in 2005, and became a professor in 2013.)

AI based on deep machine learning requires a large amount of data and uses a lot of processing power. We also researched it in great detail, but not with the aim of commercialization. We were able to achieve practical translation from French and Spanish to English as they have similar grammar, but since Japanese and English are the most different, we thought translation between them was still some ways off.

The AI translation technology that we developed is able to translate business Japanese texts into English with an accuracy exceeding that of a person with a TOEIC score of 900. We put it up against people with various scores, and it beat even those with a score of 900. We did not expect it to beat people up to this level, and so we did not prepare any human competitors with scores above 900.

We’re coming to a point where there will be no problem obtaining translations to read documents in fields where there is little ambiguity in the way language is expressed and there is a lot of data available. In particular, it is starting to become unnecessary in the field of IT to supply translated versions of manuals written in English.

Japan’s translation market is said to be around ¥270 billion, and there are thousands of small translation companies. With machine translation accuracy improving to this level, it will become necessary to introduce it into the process of producing draft translations and other things, and the weeding out of translation businesses will also progress.

As ever, computers cannot get into the University of Tokyo, cannot summarize and cannot paraphrase. They cannot write short, concise sentences like those in movie subtitles. What machines can do is perform literal translations of the texts they’re presented with. When writing an essay, the thinking process when you write in English is different from that when you write in Japanese. The aim of the words used is also different. For example, where in English you would convey logic, in Japanese you might convey feelings.

For example, when ordering something via an AI-driven voice recognition function, an American would use logical language for the execution of instructions, such as “call a taxi.” In contrast, a Japanese person would want the information processing equipment to ask, “How can I help you?” Then if the user replied, “I would like to go out,” they would like the reply, “Shall I call you a taxi?”

Language and behavior are linked. That’s precisely why I don’t think that machines can be solely relied on to interpret foreign languages. I think there will continue to be situations where the linguistic skills of humans are required, for example in negotiations between top business leaders.

(Etoh graduated from Hiroshima University Graduate School. In 2000, he moved from Matsushita Electric Industrial Co., now Panasonic Corp., to NTT Docomo Inc. This June he retired from his post as a company executive and became a professor at Osaka University. He continues to work as president of the machine translation company Mirai Translate, which was founded in 2014.)

Research has made quick progress since the birth of statistical translation using data from large translated texts in the 1990s. Since the successful implementation of neural translation based on AI’s deep learning technology, otherwise known as AI translation, the accuracy and fluency of translations has improved dramatically. In particular, we can now expect human-quality translations in Japanese to English translations, which up to now had been particularly challenging.