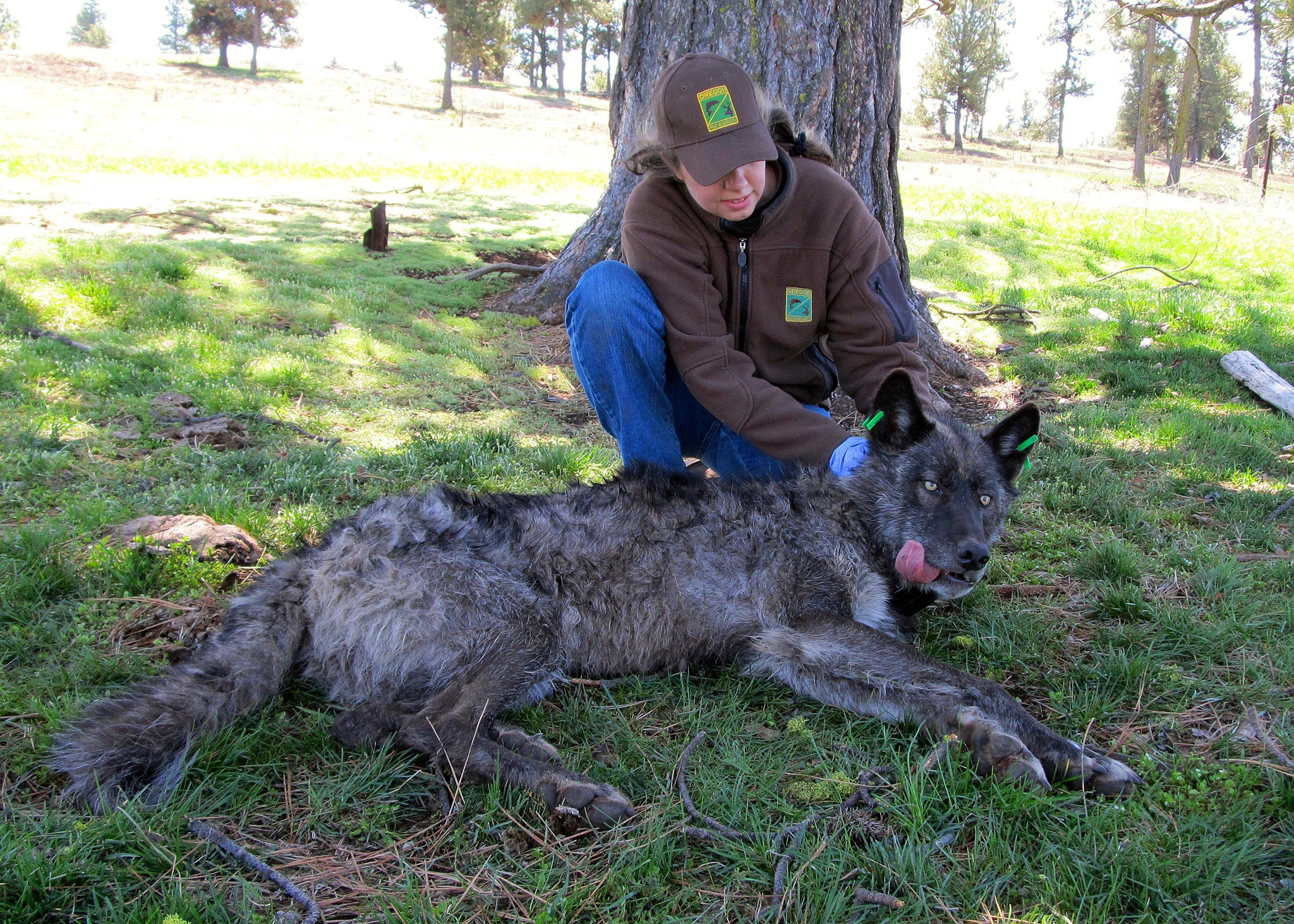 In this May 19, 2011, photo provided by the Oregon Department of Fish and Wildlife, the Imnaha wolf pack’s alpha male OR-4 is lies down after being refitted with a working GPS collar in Wallowa County east of Joseph, Ore. It’s a political debate playing out against the backdrop of a rapidly growing wolf population, a jump in wolf poaching and demands from ranchers and hunters who say the predators are decimating herds and spooking big game. (Oregon Department of Fish and Wildlife via AP)

ORTLAND, Ore. (AP) — Wolves were once so plentiful in the abundant forests that would become Oregon that the earliest settlers gathered from far and wide to discuss how to kill them.

Those “wolf meetings” in the 1840s, spawned by a common interest, eventually led to the formation of the Oregon territory, the precursor for statehood in 1859.

Today, Oregon’s statehood is secure, but the future of its wolf population once more hangs in the balance. Wolves have returned after decades, and this time, humans are having a much more contentious discussion about what to do with them.

It’s a political debate playing out against the backdrop of a rapidly growing wolf population, a jump in wolf poaching and demands from ranchers and hunters who say the predators are decimating herds and spooking big game.

The Oregon Fish and Wildlife Commission will vote in January on whether to adopt a new wolf management plan that could eventually open the door for a wolf hunt for the first time since bounty hunting wiped out wolves in the state 70 years ago. Idaho, which has a much larger population of the animals, allows wolf hunting.

Conservationists worry the plan will erode recent progress, particularly given a rash of unsolved poaching cases and an uptick in state-sanctioned wolf killings in response to wolf attacks on livestock. They are adamantly opposed to wolf hunting and say the population is a long way from supporting it.

The species lost its endangered status under Oregon law two years ago – when the population hit 81 wolves – and is no longer federally protected in the eastern third of the state. Wolves, which were wiped out in the continental U.S. in all but a slice of Minnesota, also are rebounding in other Western states, prompting similar debates about human co-existence.

“When we had zero wolves 10 years ago, and now when we have 112 wolves, that’s certainly a success story – but we’re not done,” said Rob Klavins, a wolf specialist with Oregon Wild, a conservation organization. “Can you imagine if there were only 81 known elk in the state of Oregon, or if there were 81 salmon? We wouldn’t think of delisting them.”

Early explorers noted wolves were “exceedingly numerous” in what would become Oregon, and the so-called wolf meetings that led to the region’s first civic government established a bounty for wolves in 1843 that paid $3 per hide. The state later took over the bounty and offered $20 per wolf in 1913 – the equivalent of nearly $500 today.

The last bounty payment was recorded in 1947, and the wolf vanished from Oregon for decades.

In the mid-1990s, wolves were reintroduced to central Idaho, and in 1999, a lone wolf wandered into northeastern Oregon. It was trapped and returned to Idaho.

Two more were found dead in Oregon in 2000. But the first definitive proof wolves had returned to the state came in 2007, when a wolf was found shot to death. The following year, a wolf nicknamed Sophie by conservationists gave birth to the first litter of pups born in Oregon in decades.

Last year, state biologists counted 112 wolves in the northeastern and southwestern corners of the state – and they believe that is an undercount.

Wolf conflicts with ranchers have risen and, for the first time, an elk hunter this month reported killing a wolf in self-defense. 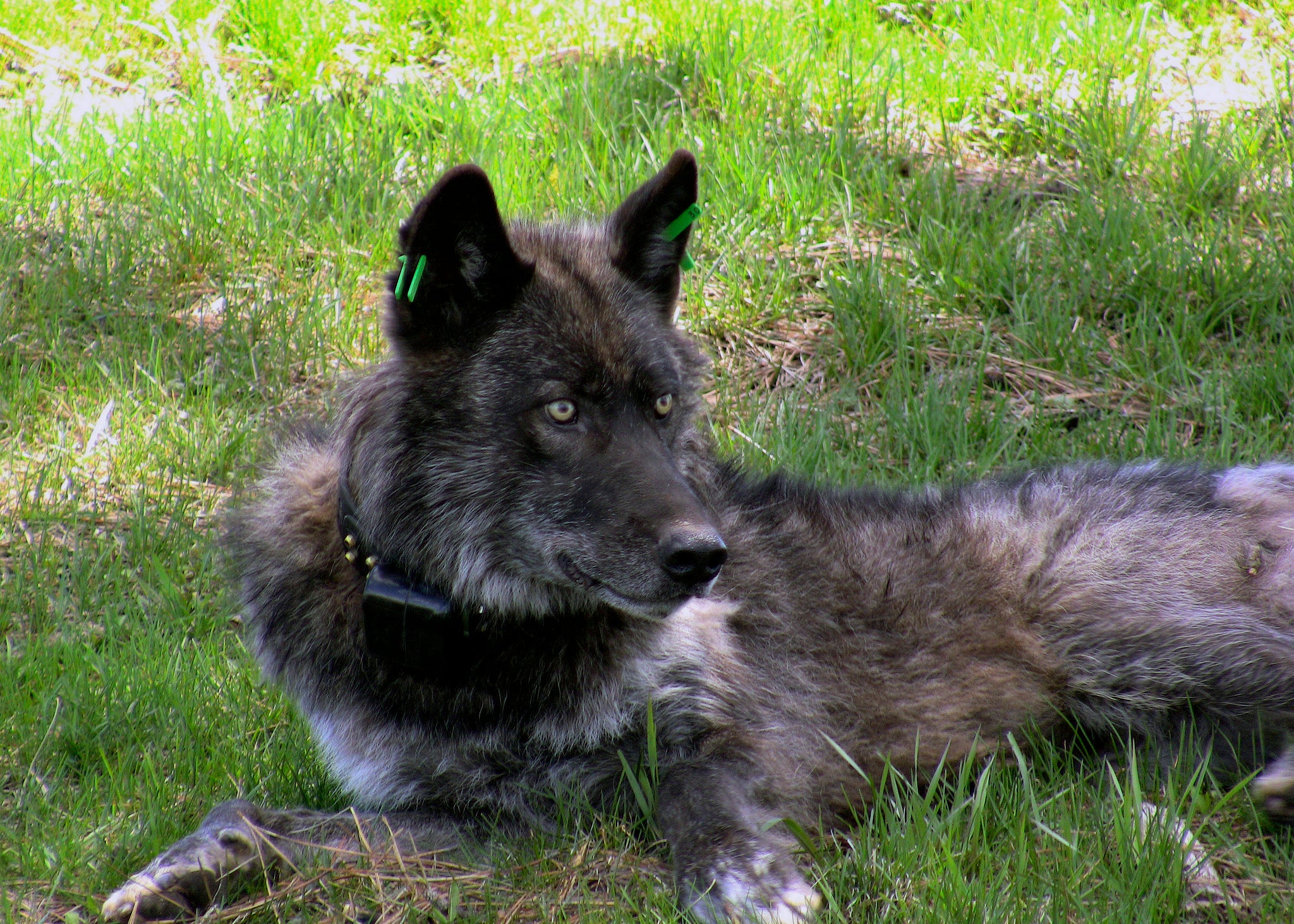 In this May 19, 2011, photo provided by the Oregon Department of Fish and Wildlife, Imnaha wolf pack’s alpha male OR-4 is shown after being refitted with a working GPS collar in Wallowa County east of Joseph, Ore. It’s a political debate playing out against the backdrop of a rapidly growing wolf population, a jump in wolf poaching and demands from ranchers and hunters who say the predators are decimating herds and spooking big game. (Oregon Department of Fish and Wildlife via AP)

That wolf was previously unknown to biologists, and the case has become a flashpoint in the fight over wolves. A local prosecutor declined to press charges, prompting 18 conservation groups to petition Gov. Kate Brown to intervene without success.

Ranchers who run cattle and sheep in northeastern Oregon also believe there are more wolves than officially documented – and say they are paying the price.

Todd Nash, head of the Oregon Cattlemen’s Association, estimates he’s lost $50,000 in dead calves and in herds that are underweight from being too spooked to graze properly.

The state requires ranchers to prove wolves have killed two animals or killed one and attempted to kill three others before it will consider killing a wolf to protect livestock. The ranchers also must show they have tried other deterrents, such as special fencing and flashing lights.

The state killed four wolves this summer and authorized a rancher to kill one more, but Nash said it’s almost impossible to prove most cases because the wolves eat the carcasses or drag them away. Ranchers in his area are fed up because the bulk of Oregon’s wolves live in just a few remote counties where he says abundant cattle make easy prey.

Killing a few wolves “does nothing but infuriate the conservation folks, and it doesn’t serve to placate the ranchers because they know it’s not going to do any good,” Nash said.

Yet the fact that Oregonians are debating when and how to kill wolves at all is incredible given the predators didn’t exist here a decade ago, said Derek Broman, carnivore coordinator with the Oregon Department of Fish & Wildlife.

As the point person on the upcoming wolf management plan, he hears from dozens of competing interests on what to do with wolves.

“It wasn’t all that long ago that people were worried about wolves blinking out and there just being a handful of them,” Broman said.

“Wolves are so contentious, and there’s a lot of baggage that comes with them – but there’s also a lot of interest, which is nice.” AB