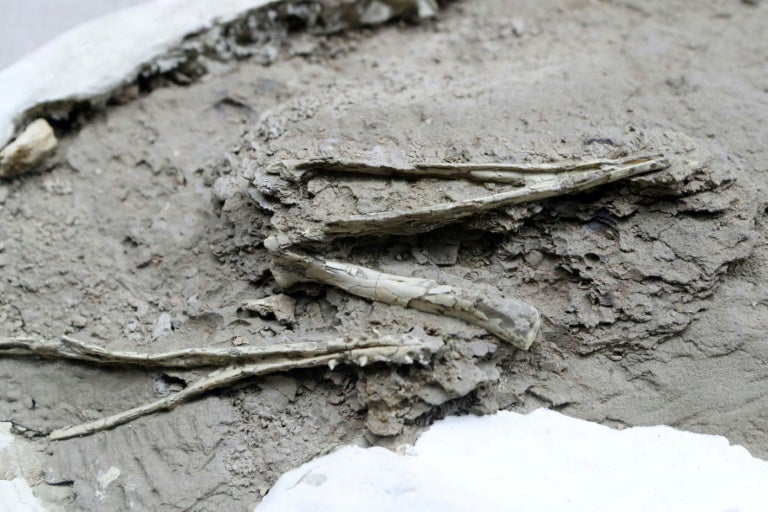 A fossilised pterosaur mandible is displayed at a museum in Hami, in northwestern China’s Xinjiang region. AFP

The largest collection of fossilized pterosaur eggs ever found has shown that pterosaurs, the airborne cousins of dinosaurs, could not fly right away and needed care from their parents, researchers said Thursday.

Pterosaurs were reptiles, and the first creatures—after insects—to evolve powered flight, meaning they flapped their wings to stay aloft instead of simply jumping and gliding.

Until now, scientists had found some pterosaur eggs with remains inside, including three in Argentina and five in China.

But the latest report in the peer-reviewed US journal Science is based on the biggest collection to date—215 fossilized eggs that were found in a 10-foot (three-meter) long sandstone block in northwestern China’s Hami City, Xinjiang Uygur Autonomous Region.

“Since these are extremely fragile fossils, we were very surprised to find so many in the same place,” Brazilian paleontologist Alexander Kellner told AFP.

“Because of this discovery, we can talk about the behavior of these animals for the first time.”

Sixteen of the eggs contained fossilized remains of a pterosaur species known as Hamipterus tianshanensis.

As adults, these creatures would have stood about four feet tall, with a wingspan of 11 feet.

None of the eggs held a full set of pterosaur bones, likely because pieces were lost over the years due to storms and floods.

But scientists did find partial wing and skull bones, along with one complete lower jaw, which fill in aspects of pterosaurs’ life cycle that have been poorly understood until now.

But their chest muscles were weak.

“This shows that when pterosaurs hatched, they could walk but not fly,” said Kellner.

“They needed their parents. This is one of the biggest discoveries we have made.”

Adult pterosaur bones were also scattered across the site, a sign that they returned to the same nesting spots over time, much the same as modern day sea turtles.

The massive numbers of eggs and bones point to major storms thrashing the site, submerging the eggs in a lake where they floated briefly before sinking and becoming buried alongside adult skeletons.

Researchers also noted that the cracked exterior of the eggs resembled the fragile softness of lizard eggs.

“All are deformed to a certain extent, which indicate their pliable nature,” said the study.

One of the young pterosaurs was estimated to be “at least two years old and still growing at the time of its death, supporting the growing body of evidence that pterosaurs had long incubation periods.”

An accompanying article in the journal Science, written by D. Charles Deeming of the University of Lincoln, called the study “remarkable for the number of eggs in association with adults and juvenile pterosaurs that it reports on.”

However, many questions remain, including whether the size of each clutch was really two as previous studies have suggested, just how the pterosaurs concealed their eggs, whether beneath vegetation or sand or soil, and why so many of the eggs appear dehydrated.

“Hopefully additional finds of equally spectacular fossils will help us answer such questions,” he wrote. KI