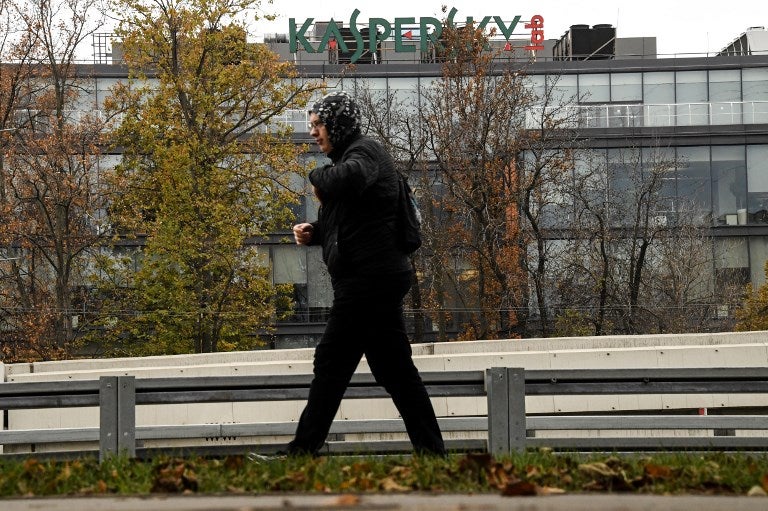 The logo of Kaspersky Lab, Russia’s leading antivirus software development company, is seen on the roof of its headquarters in Moscow on October 25, 2017. AFP

Ciaran Martin, head of the National Cyber Security Center, said “Russia is acting against the U.K.’s national interest in cyberspace.”

In a letter dated Friday to civil service chiefs, he said Russia seeks “to target U.K. central government and the U.K.’s critical national infrastructure.” He advised that “a Russia-based provider should never be used” for systems that deal with issues related to national security.

The agency said it’s not advising the public at large against using Kaspersky’s popular antivirus products.

Martin said British authorities are holding talks with Kaspersky about developing checks to prevent the “transfer of U.K. data to the Russian state.”

In September, the U.S. government barred federal agencies from using Kaspersky products because of concerns about the company’s ties to the Kremlin and Russian spy operations.

News reports have since linked Kaspersky software to an alleged theft of cybersecurity information from the U.S. National Security Agency.

Britain has issued increasingly strong warnings about Russia’s online activity. Martin said last month that Russian hackers had targeted the U.K.’s media, telecommunications and energy sectors in the past year.

U.S. authorities are investigating alleged Russian meddling in the 2016 presidential election, and some British lawmakers have called for a similar probe into the U.K.’s European Union membership referendum.

Prime Minister Theresa May said last month that Russia was “weaponizing information” and meddling in elections to undermine the international order. /cbb