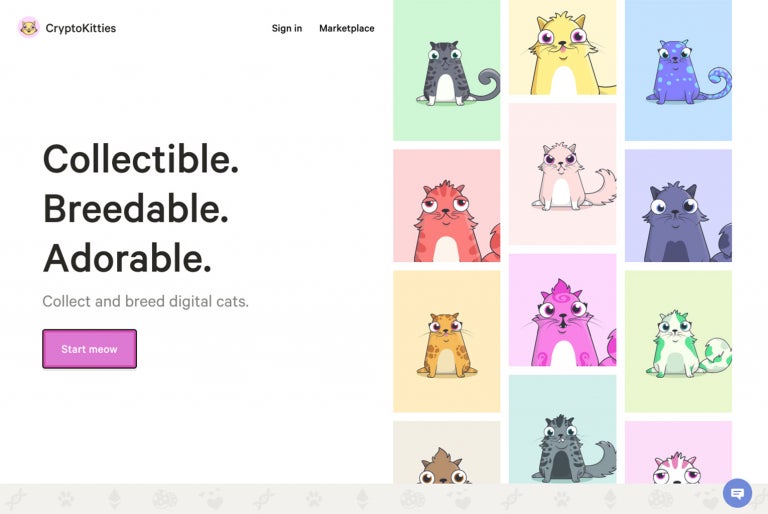 According to its creators, “CryptoKitties are collectible and breedable digital cats. Image: CryptoKitties

Never mind Bitcoin mania taking the doyen of virtual currencies into the stratosphere.

The real online craze to get with right now is to breed virtual cats.

Net-based cousins of the Tamagotchi digital pet launched in Japan 20 years ago, “CryptoKitties” are wowing owners of Ethereum, one of Bitcoin’s main rivals.

With some 50,000 sold for more than $6.6 million (5.6 million euros) in total, according to the creators’ website, the critters are steadily collaring the blockchain, the digital virtual ledger on which so-called crypto currencies run.

Ethereum owners use their virtual cash to buy the creatures, then to bring them up and feed them while taking care generally to look after their well-being.

Launched last week, “CryptoKitties” have become all the rage with on Ethereum community transaction platforms and have already account for some 5 percent of exchanges, according to specialist data site ETH Gas Station.

The game, a self-running ‘smart contract’ app created by Canada’s Axiom Zen, requires a computer running the desktop version of the Chrome browser or Firefox MetaMask, a digital wallet.

Each kitten has unique characteristics — all logged on the Ethereum blockchain — as well as an unlimited lifespan.

According to its creators, “CryptoKitties are collectible and breedable digital cats.

“When two CryptoKitties breed, their offspring’s appearance and cattributes are determined by each parent’s 256-bit genome and an element of chance, leading to 4-billion possible genetic variations.”

Prices in this pixels-pet market place Wednesday ranged from 100,000 Ethereum (around $222) for “Hot Cats Here” — who admits to a “secret indulgence” for steak — to G17 Mouki, going for less than one hundredth of a cent and with a confessed penchant for lasagna and cereal.

In the first week since the laptop log-on litter launched, two transactions saw feline fans shell out more than $100,000 — the record saw one kitten go Sunday for $117.712,12 but the mean price is nearer $131, the creators said.

Bloomberg News has described the game as the first successful non-coin related application to emerge on blockchain and noted if such applications take off they could prove a rival to the $108.9 billion global PC and video games market.

On the downside, the high demand is slowing down the speed of transactions on the blockchain and forcing a hike in prices.

“Due to congestion on the network we are increasing the birthing fee from 0.002 ETH to 0.015 ETH. We hope this will allow more kittens to be born on time as there have been significant delays,” CryptoKitties tweeted. AB