Potatoes for peace: how the humble tuber stopped conflict in Europe 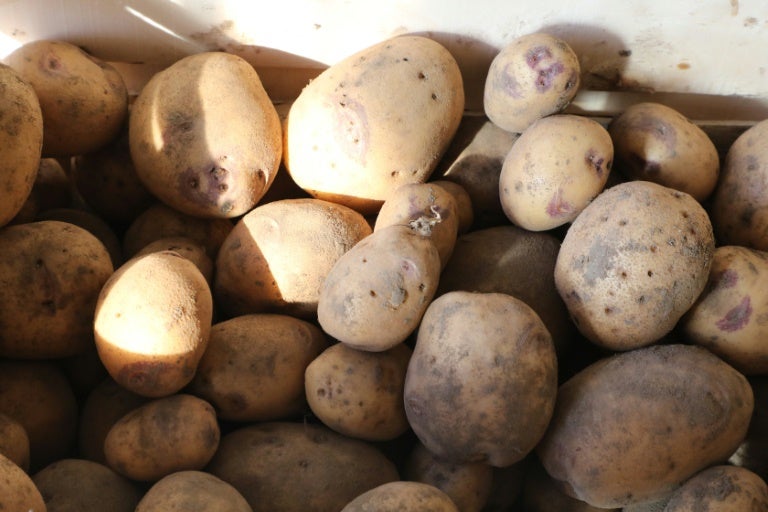 A new study says the introduction of potatoes and the resultant increase in productivity “dramatically reduced conflict” both within and between states for some two centuries. Image: Ludovic Marin / AFP

The humble potato — drought-resistant, able to thrive in diverse soils, and enjoyed fried, steamed or baked — brought centuries of relative calm and prosperity to Europe after its introduction in the 16th century, a new study says.

The crop, discovered in Latin America in the 1400s before eventually sweeping through Europe, greatly boosted productivity, helping lower land costs while improving nutrition and raising wages, from peasants up to the ruling classes, according to the study for the National Bureau of Economic Research.

The blessings that flowed from this agricultural revolution helped ease the economic and societal pressures that can lead to costly and disastrous conflicts, says the report.

The introduction of potatoes and the resultant increase in productivity “dramatically reduced conflict” both within and between states for some two centuries, it says.

The researchers, who examined 2,477 battles fought in 899 wars over a 500-year period, drew two key conclusions.

The first is linked to the declining value of land on which potatoes are grown.

According to the study, the value of the land on which potatoes were grown fell with advances in productivity. Populations were able to feed themselves on ever smaller amounts of land.

“Conflicts declined when the value of the object for which one was fighting decreased,” the study says.

Meantime, increases in farmers’ incomes, often due to much bigger and more reliable harvests, boosted tax revenues for the state, providing added governmental stability and thereby helping to “buy” the peace, the report states.

To risk losing these resources — for workers and for political leaders — represented a financial danger that states were less and less willing to risk, resulting in “a decline in peasant revolts and civil wars,” the study said.

It had become “too expensive to engage in combat.”

The analysis does not detail the impact of specific wars or conflicts but says that most of those studied took place on the borders of modern-day Austria, France, Russia and Turkey. Others were in the Near East and North Africa.

The potato was selected for the study because it can be grown in many types of soil and is resistant to “drought shocks,” researchers say, while other vegetables cannot be grown in conditions as hot or cold.

Cultivation of the potato improved nutrition in periods of cold or drought, helping ease the pressures of supporting growing populations, said Murat Iyigun, one of the study’s authors.

The study’s conclusions square with previous research on the link between climate shocks and a country’s entry into war.

“The climatic shocks observed over time, like rough winters, have tended to favor the emergence of conflicts,” said Iyigun, a University of Colorado professor. “People have had to fight to survive.”

Do these theories apply to the contemporary world? Partially, he said.

“One of the keys to development, without risk of conflict, for the very poor states still largely dependent on agriculture is linked to improving and steadying the supply of their agricultural output.” AB