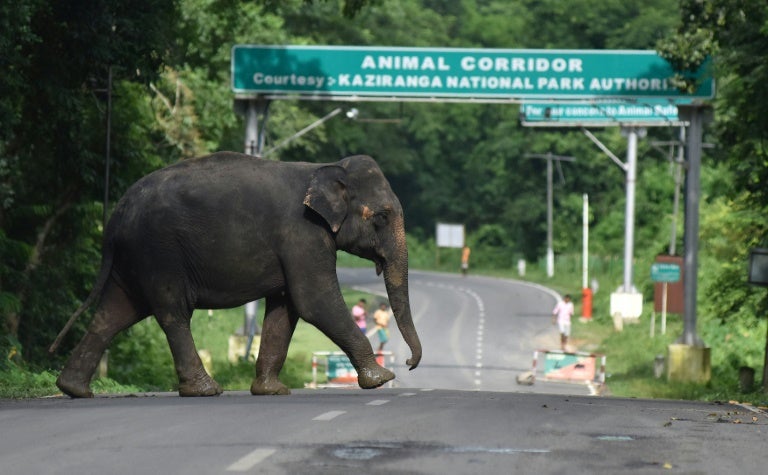 Many busy migratory routes have been cut by roads and railway lines in India’s Assam and West Bengal states, increasing the risk of accidental elephant deaths. Image: Biju BORO / AFP

A train has struck and killed five elephants as they crossed over tracks at a tea plantation in northeast India, an official said Monday.

The elephants, including a pregnant female, were part of a larger herd wandering through the plantation early Sunday in Assam state, home to India’s biggest wild elephant population, when they were mowed down by the train.

“All five elephants died on the spot. A stillborn calf was later removed from the pregnant female,” said Vikas Brahma, head of Assam’s forest department.

Brahma told AFP it was uncommon for elephants to move through that section of Assam, a thickly-forested state famed for its tea and wildlife, and officials were unaware there were herds in the area.

Railway authorities have been issuing alerts about elephant herds passing through the state to prevent accidents.

But a railway spokesman told the Indian Express newspaper that no speed restrictions were in place at the time of the accident on Sunday, as the area was not a designated migratory path for elephants.

Deforestation and construction activity near their habitats force elephants to stray further afield for food, often bringing them into conflict with humans.

Many busy migratory routes, known as elephant corridors, have been cut by roads and railway lines in Assam and neighboring West Bengal state, increasing the risk of accidental deaths, poaching and stampedes.

Assam has 5,620 elephants according to a 2011 census, more than any other state in India.

An estimated 60 elephants have died so far this year in Assam, Brahma said.

Many of the deaths were caused by electrocution, as farmers erect electrified fences around their fields to keep wild animals away.

Elsewhere, an elephant killed a trainer during a procession at a Hindu temple in the southern state of Kerala on Sunday.

The elephant ran amok amid a large group of devotees, trampling and killing the trainer, the Press Trust of India reported. AB

TOPICS: Accident, deforestation, elephant, elephant herd, five elephants, migration, migratory routes, railroad
Read Next
Potatoes for peace: how the humble tuber stopped conflict in Europe
EDITORS' PICK
Mandaluyong fire put under control hours after it started
Leveling up your ‘lutong bahay’ with the kitchen companion you never knew you needed
Bato de la Rosa, Risa Hontiveros back bill increasing female recruitment quota in PNP
Quarantine violations still punishable despite deleted provisions in ‘Bayanihan 2’ – Bato dela Rosa
Someone from the Philippines can become $356 Million richer this Tuesday
Cherry Mobile teams up with Cloud Panda PH, launches online store
MOST READ
‘If I had not been SolGen, I will make you eat your words,’ Calida tells Coco Martin
5 car dealership outlets shutting down
51 percent of German firms holding back investments in PH, but not because of COVID-19
Senate OKs bill authorizing president to postpone opening of classes beyond August
Don't miss out on the latest news and information.