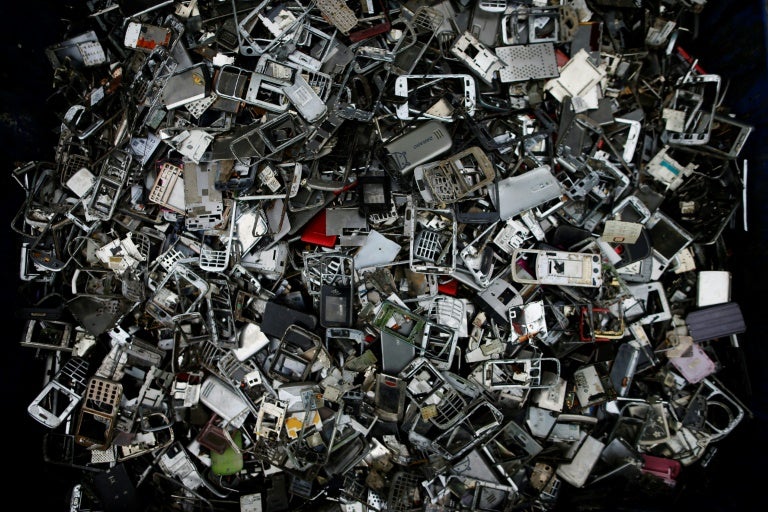 A full 44.7 million tonnes of so-called e-waste was generated around the world in 2016, up eight percent from 2014, according to the UN’s International Telecommunication Union, the UN University and the International Solid Waste Association. Image: Charly Triballeau / AFP

The UN warned Wednesday that waste from discarded electronics like mobile phones, laptops and refrigerators is piling up worldwide, and it urged far better recycling of the often hazardous rubbish.

A full 44.7 million tonnes of so-called e-waste was generated around the world in 2016, up eight percent from two years earlier, according to a report from the UN’s International Telecommunication Union, the UN University (UNU) and the International Solid Waste Association.

That’s the equivalent of 4,500 Eiffel Towers, the report noted, adding that the number was expected to swell “significantly” over coming decades.

By 2021, the world will likely be cluttered with a full 52.2 million tonnes of such waste, which today consists mainly of fridges, washing machines and other domestic appliances, but also increasingly mobile phones and computers.

At the same time, this waste, which can pose serious risks to human health and the environment, is rarely recycled or properly discarded, with most of it ending up at dumpsites or in incinerators, according to the report.

“E-waste management is an urgent issue in today’s digitally dependent world, where use of electronic devices is ever increasing,” ITU chief Houlin Zhao said in a statement.

There is also an economic argument for more recycling: the total value of all raw materials present in e-waste, including gold, is estimated to be worth around 55 billion euros ($64.6 billion) — more than most countries’ national economies, the report said.

On a positive note, a growing number of countries are adopting e-waste management policies.

Today, 66 percent of the global population, living in 67 countries, is covered by such policies, up from just 44 percent in 2014, Wednesday’s report found.

This is good news as shortening replacement cycles for mobile phones and other devices continue to push the mountains of e-waste ever higher.

There are “also things that we can avoid, for example cables… that (are) not compatible with different devices,” she told reporters in Geneva.

Perhaps the most promising approach to reducing e-waste is a system where consumers no longer purchase devices, but instead only the services they provide, Ruediger Kuehr of UNU’s Sustainable Cycles Programme told AFP.

If companies retain ownership of devices and appliances, providing consumers with replacements when needed, they would have an incentive to properly collect and recycle them and improper disposal and storage of the equipment would “substantially decrease, or ideally disappear,” he said in an email. AB