Ticked off: Tiny ‘dracula’ with a taste for dinosaur blood 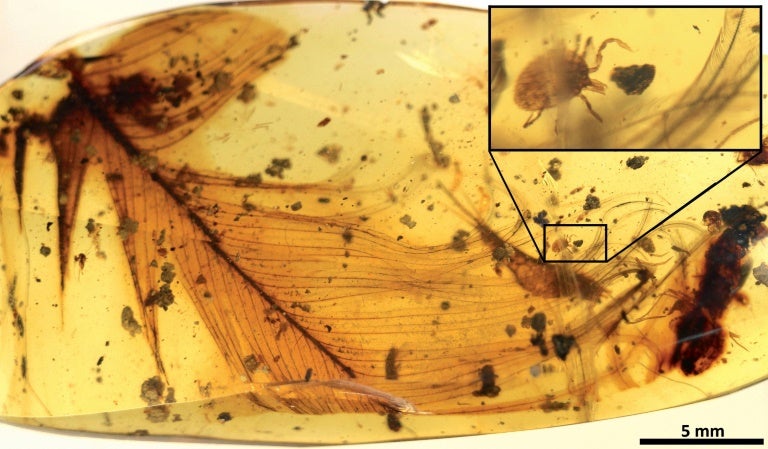 Dinosaurs, the most fearsome creatures ever to walk the Earth, were bugged already 100 million years ago by a paltry pest that still plagues animals today: the bloodsucking tick, scientists have discovered.

Preserved for eternity in amber, fossilized tree resin, researchers have found a hard tick — uncannily similar to those we know — clinging to a 99-million-year-old dinosaur feather, a team wrote in the journal Nature Communications this week.

“The discovery is remarkable because fossils of parasitic, blood-feeding creatures directly associated with remains of their host are exceedingly scarce, and the new specimen is the oldest known to date,” they said in a statement.

The well-preserved, juvenile insect was less than a millimeter in size, had eight legs, but no eyes.

One of its legs was entangled in the barb of a “pennaceous” feather — those with a central quill as sported by some dinosaurs and their modern offspring: birds.

The team could not identify which type of dinosaur the feather had belonged to, but dated it to the Cretaceous period some 145 million to 66 million years ago.

“So although we can’t be sure what kind of dinosaur the tick was feeding on, the mid-Cretaceous age of the Burmese amber confirms that the feather certainly did not belong to a modern bird, as these appeared much later in… evolution,” said study co-author Ricardo Perez-de la Fuente of the Oxford University Museum of Natural History.

The fossilized tick provides the first evidence of an early parasitic relationship between ticks and dinos, the team said.

And they found further evidence, though less direct, with the discovery of two specimens of a different tick — which they named after the fictitious bloodsucker Count Dracula — also locked up in amber.

These ticks had remains of skin beetle larvae stuck to them. Skin beetles feed in nests, consuming feathers, skin, and hair.

“And as no mammal hairs have yet been found in Cretaceous amber,” the ticks’ host was likely to have been a feathered dinosaur, said the team.

The pair of ticks were named Deinocroton draculi from the Greek for “terrible” (deinos) and “tick” (kroton), followed by a nod to Bram Stoker’s famous vampire.

“Together, these findings provide direct and indirect evidence that ticks have been parasitizing and sucking blood from dinosaurs within the evolutionary lineage leading to modern birds for almost 100 million years,” the researchers said.

“While the birds were the only lineage of theropod dinosaurs to survive the mass extinction at the end of the Cretaceous 66 million years ago, the ticks did not just cling on for survival, they continued to thrive.”

Ticks feed off the blood of animals, sometimes transmitting ailments such as Lyme disease, typhus, or tick fever.

The team said whatever remained of the blood the ticks had sucked, would not have preserved any dinosaur DNA. AB