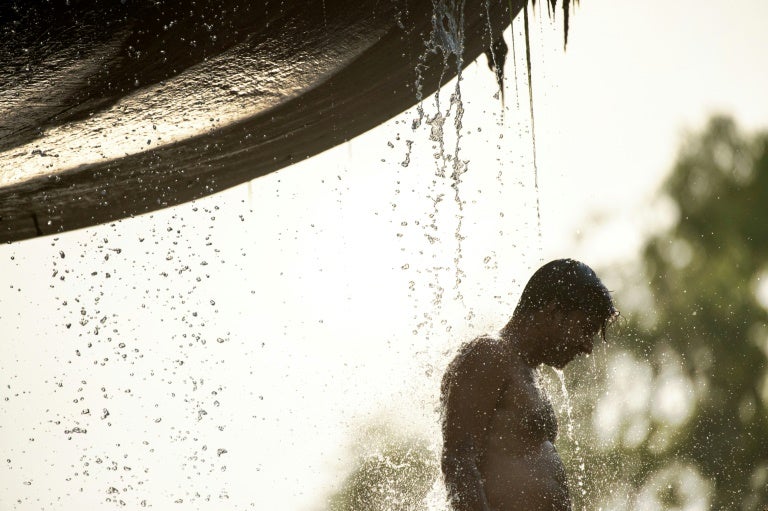 A man stands under the water of a fountain in New Delhi, India, during a heat wave in May 2016. Image: ROBERTO SCHMIDT / AFP

Last year’s global heat record, extreme heat in Asia and unusually warm waters off the coast of Alaska happened purely because the planet is getting warmer due to human activities like burning fossil fuels, a study said Wednesday.

The findings mark the first time that global scientists have identified severe weather that could not have happened without climate change, said the peer-reviewed report titled “Explaining Extreme Events in 2016 from a Climate Perspective.”

Until now, the contribution of human-driven climate change has been understood to raise the odds of certain floods, droughts, storms and heat waves — but not serve as the sole cause.

“This report marks a fundamental change,” said Jeff Rosenfeld, editor-in-chief of the Bulletin of the American Meteorological Society, which published the peer-reviewed report.

“For years scientists have known humans are changing the risk of some extremes. But finding multiple extreme events that weren’t even possible without human influence makes clear that we’re experiencing new weather, because we’ve made a new climate.”

In 2016, the planet reached a new high for global heat, making it the warmest year in modern times.

These record average surface temperatures worldwide were “only possible due to substantial centennial-scale anthropogenic warming,” said the report.

Asia also experienced stifling heat, with India suffering a major heat wave that killed 580 people from March to May.

Thailand set a new record for energy consumption as people turned on air conditioners en masse to cool off.

Even though the tropical Pacific Ocean warming trend of El Nino was pronounced in 2015 and the first part of 2016, researchers concluded that it was not to blame.

“The 2016 extreme warmth across Asia would not have been possible without climate change,” said the report.

“Although El Nino was expected to warm Southeast Asia in 2016, the heat in the region was unusually widespread.”

In the Gulf of Alaska, the nearby Bering Sea, and off northern Australia, water temperatures were the highest in 35 years of satellite records.

This ocean warming led to “massive bleaching of the Great Barrier Reef and one of the largest harmful algal blooms ever off the Alaska shore,” according to the report.

“It was extremely unlikely that natural variability alone led to the observed anomalies.”

Another chapter found that the so-called “blob” of sub-Arctic 2016 warmth “cannot be explained without anthropogenic climate warming.”

Most of the extreme events studied were influenced to some extent by climate change, as in the past six years that the work has been published.

Climate change was found to have boosted the odds and intensity of El Nino, the severity of coral bleaching in the Great Barrier Reef, and warmth in the North Pacific Ocean.

Flash droughts over southern Africa, like the one in 2015 and 2016, have tripled in the last 60 years mainly due to human-caused climate change, it said.

“Extreme rains, like the record-breaking 2016 event in Wuhan, China are 10 times more likely in the present climate than they were in 1961.”

The unusual Arctic warmth observed in November–December 2016 “most likely would not have been possible without human-caused warming,” it added.

But not all extreme weather was influenced by global warming.

About 20 percent of the events studied were not linked to human-caused climate change, including a major winter snowstorm in the Mid-Atlantic United States, and the drought that led to water shortages in northeast Brazil.

The findings were released at the annual meeting of the American Geophysical Union in New Orleans. AB