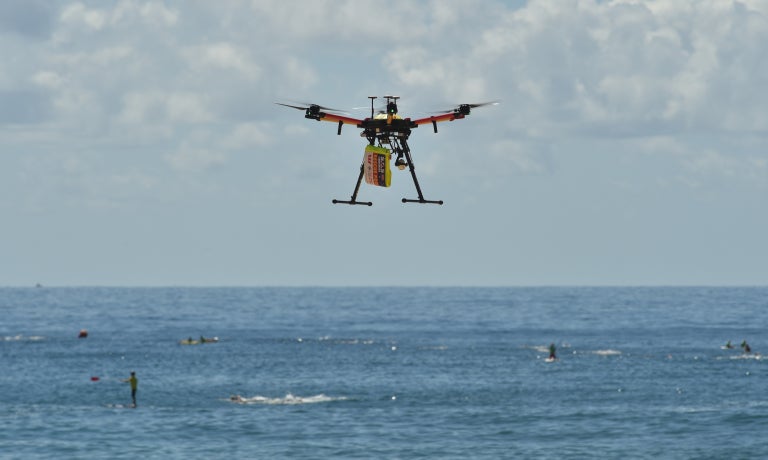 The software can differentiate between sea creatures, like sharks which it can recognize with more than 90 percent accuracy, compared to about 16 percent with the naked eye. Image: Peter Parks / AFP

As hundreds of people lined up in early morning sun to take part in a recent ocean swimming race at Bilgola beach north of Sydney, they did so in the knowledge the ocean had been scanned to keep them safe.

“I think it is really awesome,” 20-year-old competitor Ali Smith told AFP. “It is cool to see technology and ocean swimming getting together, and hopefully more people will feel safer and get involved.”

The drones being used are top notch.

Artificial intelligence is built using thousands of images captured by a drone camera to develop an algorithm that can identify different ocean objects.

The software can differentiate between sea creatures, like sharks which it can recognize with more than 90 percent accuracy, compared to about 16 percent with the naked eye.

“We can identify 16 different objects, like sharks, whales, dolphins, surfers, different kinds of boats and many other objects of interest,” software designer Nabin Sharma from the University of Technology Sydney (UTS) told AFP.

“We are spotting sharks and we can alert swimmers and surfers in real time, so we can get them back to the beach,” he added. “In short, we are trying to make beach recreation more safe.”

Surf lifesaving clubs are Australian institutions dotted along the country’s coastline — where the majority of the population live.

They ordinarily rely on the naked eye to spot sharks, and launch surfboards or rubber dinghies from shore to rescue anyone in trouble.

The drone is a welcomed technical intervention that can also drop safety devices to distressed swimmers, just moments after they have been identified.

“The reason the drone is so important is sometimes we can’t see over the waves, so having the drone is that little piece of extra prevention for us,” Bilgola Surf Lifesaving Club president Romilly Madew said.

“It gives us that line of sight that we can’t see — both for the surfers, and really for our patrols.”

Spotting other hazards, like jellyfish or strong currents, via the drone gives swimmers greater confidence in the sea, she added.

Some beaches in Australia have shark nets, but a government report this week called for their phasing out in favor of exploring a range of alternatives, including sonar technology and aerial patrols.

The inquiry found that nets did not guarantee public safety any more than any other deterrents but caused significant damage to marine life.

There have been several shark attacks off the nation’s vast coastline this year.

Experts say incidents are increasing as water sports become more popular and baitfish move closer to shore, but fatalities remain rare with just 47 in the past 50 years.

UTS are also adapting the emerging technology to spot crocodiles for a program in northern Australia. AB