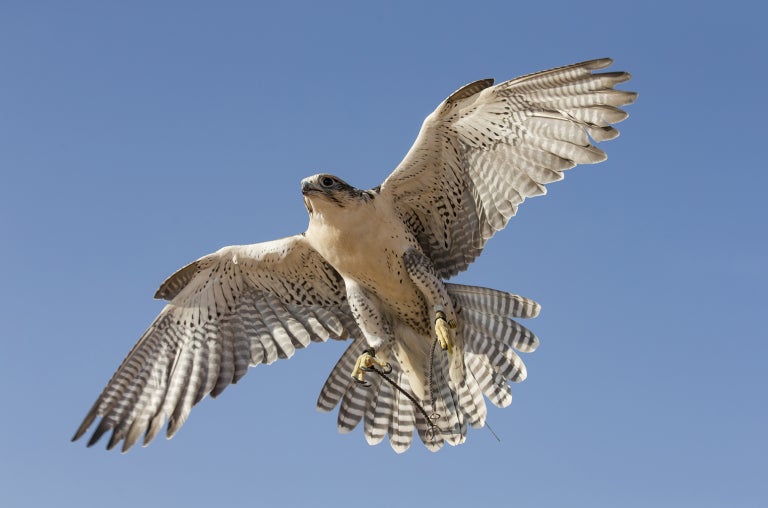 Researchers studied the way falcons fly toward prey by fitting eight of the birds with video cameras and GPS devices. Image: Katiekk2 / IStock.com

Peregrine falcons are nature’s fastest predators, and the way they swoop down on a target may one day inspire small, visually guided drones that can take out rogue drones, researchers said Monday.

Falcons’ attack trajectories do not follow any geometric rules, contrary to popular belief, said the report in the Proceedings of the National Academy of Sciences.

Rather, the birds use their eyes to line up parallel to a moving target on final approach, much like a guided missile.

Researchers took to the hills of Wales to study the way falcons fly toward prey by fitting eight of the birds with video cameras and GPS devices.

“It was very exciting to study these sleek, formidable aerial predators, and to watch them as they chased down our maneuvering lure towed behind a small remote-controlled airplane — then, through our computer modelling, to reveal the secret of their attack strategy.”

The on-board video from falcons showed that in the last seconds before an attack, their trajectories follow a law known as proportional navigation (PN), used by visually guided missiles.

“Remarkably, it turns out that they do this in a similar way to most guided missiles,” said principal investigator Graham Taylor, professor in Oxford University’s department of zoology.

“Our next step is to apply this research to designing a new kind of visually guided drone, able to remove rogue drones safely from the vicinity of airports, prisons and other no-fly zones.”

Since the falcons move more slowly than missiles, researchers believe this strategy could be adapted for use in small drones designed to remove other drones from protected airspace, a growing problem around the world.

“This method does not require any information on a target’s speed or distance, instead relying simply on information about the rotation of the attacker’s line of sight to the target,” said the report.

The study was funded by the US Air Force Research Laboratory. AB