Stephen Hawking wary of mysterious flying object, says it may be ‘interstellar spacecraft’ 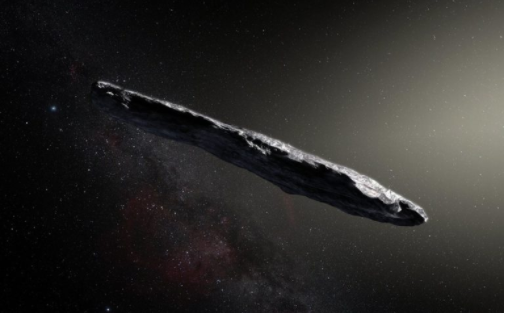 This artist’s impression shows the first interstellar asteroid: Oumuamua. This unique object was discovered on Oct. 19, 2017, by the Pan-STARRS 1 telescope in Hawaii. Subsequent observations from ESO’s Very Large Telescope in Chile and other observatories around the world showed that it was traveling through space for millions of years before its chance encounter with our star system. Oumuamua seems to be a dark-red, highly elongated metallic or rocky object, about 400 meters long, and is unlike anything normally found in the solar system.  (Image: European Southern Observatory official website)

In October, scientists discovered a massive, cylindrical object visiting our solar system, which has been dubbed “Oumuamua,” a Hawaiian term that means “a messenger from afar arriving first.”

The unidentified flying object has become the subject of fascination among astrophysicists—primarily for its dubious origin.

But despite its majestic looks, renowned physicist Stephen Hawking suggests that Earthlings must be wary of it, as the UFO may very well be part of an alien probe or an unseen natural phenomenon.

“Researchers working on long-distance space transportation have previously suggested that a cigar or needle shape is the most likely architecture for an interstellar spacecraft, since this would minimise friction and damage from interstellar gas and dust,” he was quoted as saying in a report from the Daily Star.

“While a natural origin is more likely, there is currently no consensus on what that origin might have been, and Breakthrough Listen is well positioned to explore the possibility that Oumuamua could be an artefact,” he added.

The project is based in Green Bank in West Virginia, USA, and is currently focused on tracking Oumuamua’s movement.

Meanwhile, Avi Loeb, professor of astronomy at Harvard University and a member of the Breakthrough Listen initiative, explained the importance of their team’s efforts.

“The chances that we’ll hear something are very small, but if we do, we will report it immediately and then try to interpret it,” he said.

“It would be prudent just to check and look for signals. Even if we find an artefact that was left over and there are no signs of life on it, that would be the greatest thrill I can imagine having in my lifetime.

Loeb added: “It’s really one of the fundamental questions in science, perhaps the most fundamental: are we alone?”  Khristian Ibarrola /ra