My entire life has led to this moment… T-Rex conducting the Jurassic Park theme song. 😭❤😂😂😂 pic.twitter.com/j9BtCwmPKY

For moviegoers and dinosaur fans, the “Jurassic Park” theme may be considered an anthem for the fandom. So what would happen if a T-Rex acted as a conductor to an orchestra playing the iconic piece of music?

Twitter user Ailyn Marie shared a video of such an event. The video has recently gone viral, with over four million views and over 91,000 retweets as of this writing.

Netizens couldn’t help but be overjoyed at the spectacle. One commenter said, “This is what makes life worth living.”

Image: Screengrab of comments from Twitter/@TheLeanMarie

It turns out other people also thought it was a great idea to have a T-Rex lead an orchestra. 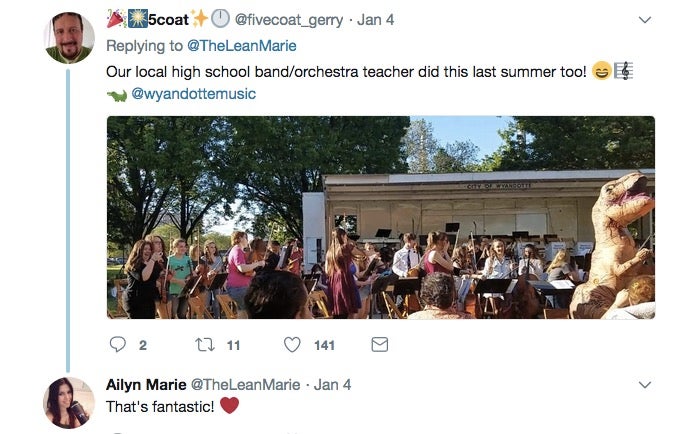 Image: Screengrab of comments from Twitter/@TheLeanMarie

While the video has been delighting fans just recently, it’s actually a performance recorded way back last year. According to Billboard, conductor Christopher Dragon led the Colorado Symphony Orchestra wearing an inflatable T-Rex costume at the Denver Comic Con last March 2017. The orchestra attended the event to perform “A Symphonic Tribute to Comic Con: The Tetralogy”.

The orchestra also played music from “Star Wars”, “The Nightmare Before Christmas” and “Harry Potter and the Prisoner of Azkaban”. JB